We gave it a good bash. The sailors; Brian, Evan and Alex played a blinder.

We were leading (briefly) for the start run at Oban. The sail to Mull was highlighted by some great rowing from Alex on our secret weapon rowing rig which gained us a few places when the wind dropped.

Land on Mull at 17:32 Fri. We knew the run was a long one and it didn’t disappoint. Big climb out the glen to the summit for 20:43 Fri. Back down and head torches on as we change back into road shoes. Long hobble back to Salen and clock out at 23:41 Fri.

The sail to Jura was long. Long and lumpy. Food was taken on and in some cases seen again. We and most others missed the tide at Fladda. Again, thanks to the oars we got going a little ahead of the rest and a hardy effort by the guys above deck eventually saw us arrive in Craighouse at 21:17 Sat.

It was good to see Craig, a Jura local, who shared my previous boat race experience which ended in a DNF after a complete washout in 2015. He waved us off and we got in most of the approach to Ben C before the head torches came out. It was a case of stick to the trods and get it done. Rain before ascent of Ben O gave the scree some added slip but no disasters. Clocked back into the hall at 03:07 Sun. JD appeared at this point from behind a pile of boxes (having been in the pub when we clocked in) and sent us on our way.

We were then back into the familiar flopping about with plates and cushions and charts falling all over the place for most of the sail to Lamlash. Hardly anything could be stomached during this leg so as soon as we got ashore we shovelled as much in as possible. Arrived at Lamlash at 17:30 Sun.

A good shout from Christine and we set off for the final stretch. It was time to light the burners and use whatever dregs were left in the tank. Clocked back in at 22:00 Sun.

The sail to Troon was the racing highlight of the trip. We knew the teams we had caught on the hill were on faster boats so it made for an exciting finish. Interestingly we had put 5 mins in to the Kea runners (class 2) on the hill but they had still got back to Lamlash 13 mins before us, but without oars. We rowed passed them out into the light winds and into 9th place overall and picked up a steady couple of knots towards Troon in the dark. About a mile from the harbour we saw the dark shadows of Kea’s sails edging past us and getting into position to approach the finish! With Alex at the helm and everyone keeping cool and working as one the sailors pulled off a great move of judgement and skill, sailing right past their runners, who had been rowing from the outer harbour. As we edged in front of them Roddy and I jumped into the dinghy and rowed like stink. Running on Adrenaline and Tennents we got to the pontoon, jumped out and sprinted up to the marina office. We had secured 9th place overall and were 1st in class 3 by a good way (10 hrs before next in class). The champagne cork was popped into Troon harbour at 3am Monday morning.

Brutally brilliant few days and great to get such a classic completed!

Saturday came round all too quick. A week spent working away meant I had just enough time in Glasgow to get a wash done then head back to Tayvallich to catch the early Sat rib. The good weather has continued and there was a good showing of Westies at this one. For my sins and as long as they’ll have me I’ll run this race for Jura, so no yellow vest today. Hot hot air and dry underfoot meant good conditions but very little water on the hill.

Always a hard one but keeping it steady worked until the last pap. Wheels came off. Corra was painful and dizzy and the descent to the bridge no better. Roddy finally making his move, overtaking at the river crossing. Kerry joined me for the road and I made it back in bits but with a PB and only 1 minute behind Roddy. Ridiculous.

Pints were had and grateful to get my share of the Kildalton Cup as 2nd ‘local’ home which of course spent the evening getting filled up with numerous prizes and well passed about at the ceilidh. We were also jointly awarded the John Dare Shield for our endeavours over both weekends. While I’d like to think this shows we are a highly respected running duo, forever famous after conquering the paps in the dark and nailing a pontoon sprint-finish, in reality I think it reflects the number of thirsty Westies who nominated after seeing the bottle stall prize table. Either way, we accepted graciously.

Roddy proposed the LAMM back in the depths of winter. Harris sounded like it would be a good bit of fun. I didn’t know much about mountain marathons but I already have an OMM 25l so knew that no further planning was required until closer to the time…

That time came all too quickly on Monday after Fell race. A tent was borrowed, and some kit thrown in a bag again before picking Roddy up at Luss on Thursday morning and heading North. Of course stopping numerous times to both make and take calls to keep up the pretence of ‘working’. The Fort William Morrisons was a Where’s Wally of hill runners. Caught up with fellow Westies on the boat from Uig for a Skye Ales tasting cruise. Niall & Rob, Leyre & Elizabeth, Ian & Mark and others were all aboard, with more already there.

After arriving at Tarbert we wandered along to the hall for registration and a few pints in the marquee bar. Opening the huge maps on sat morning it quickly became clear how large Harris is. First day we were massively over-ambitious but keen to include a climb of Clisham, the highest point in the Outer Isles. From here we were basically chasing the clock to the mid camp. With any ideas of a big points tally out the window it was a case of damage limitation. Big hills, hot sun, tired bodies.

We got to the mid camp 40 mins late so had 80 hard-fought points deducted. The camp was just amazing. Battered bodies everywhere on grass, beach and sea. People sitting in groups around their tents swapping stories and enjoying the great evening and amazing lack of midgies.

Day 2 we took as direct a route as possible but still enjoyed a big hill day. The relief at getting back to Tarbert was all too clear for both of us. Cooled off with a swim in the sea and a drink. A few of us stayed another night, camping at the beach at Horgabost which was another fantastic evening.

To say I enjoyed every minute of the last few weeks’ adventures may be pushing it. But we got a few stories, a couple of t-shirts and even a trophy to show for it. Was a real pleasure running and eating pork pies with you, Roddy. Looking forward to the next one, on home soil, Switzerland or someplace else! 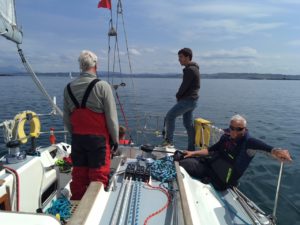 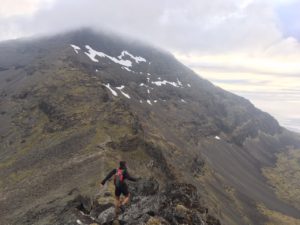 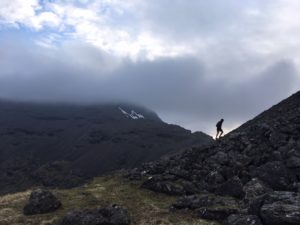 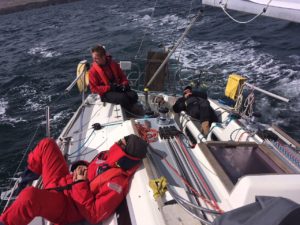 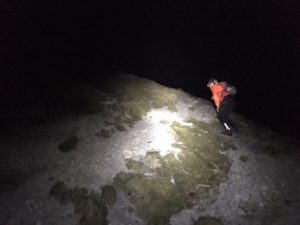 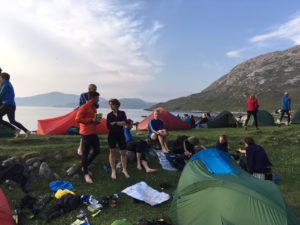 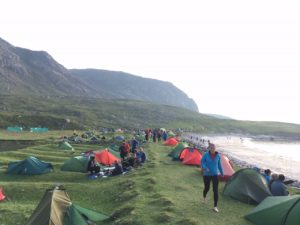 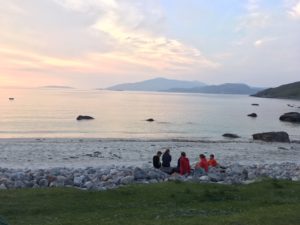