“You signed up for a mountain marathon, in November, in the Cairngorms. What did you expect?” I was told these words around the heating element at the mid-way camp of GMC, a two-day orienteering challenge, this year set in the area around White Mounth. A few hours previously Andy, my partner, and I had been slowly traversing the high plateau between Sandy Hillock and Black Hill of Mark. If you don’t recognise these names, there is a reason – the pathless landscape didn’t appear well-trodden. Sideways rain lashed our faces and the wind was unrelenting. Andy had a joint injury and I kept an eye on him over my shoulder – a soggy man with thumbs up. In front of us appeared a sea of peat hags and bog. The track of the Capel road came into sight – a tempting quick route to camp….

The best of mountain challenges are born from beer and I had signed us up to this in the height of summer after I couldn’t sleep due to the room spinning. The A-course seemed within our limits – 55km over two days; Andy and I regularly run in the hills together and we thought we would manage this no bother. We were slightly concerned by a text from the GMC organiser asking if we were sure we knew what we had signed up for, but put this down to routine. Nor were we discouraged when no-one else had received this text, or that there were only a handful of people doing the A course.

We started just after sunrise on the Saturday, a beautiful morning with clear skies and the White Mounth hills rising crisp above the forest. We waved goodbye to Megan and Issy, our friends doing the B, and ran off into the Balmoral forest for a short woodland section. This ended on the Glen Gelder plain and feeling giddy we set off south towards the hills, picking up checkpoints. The weather set in as we rounded Meikle Pap – a forecast storm of rain and gusts of 60mph. We battered through, traversed under Lochnagar, descended for lunch at Loch Muick and headed back up for a relentless – and fairly unenjoyable – slog. I had been shivering for a few hours and so turned to Andy – “have you thought about retiring?”. He was soaked, cold and in pain yet looked genuinely confused as he said “No”, which put an end to my moaning. We saw two Westies, Tom and Ally, just before ascending Ferrowie and our spirits rose to see friends who were also suffering. From here on the sun came out, the rain relented, and the wind began to dry our clothes. From the Black Hill of Mark we could see the high plateau covered in snow, rising above us, bathed in golden light. We crossed the Allt Darrie in spate and the cold felt good on our legs. We ran through a wind-tunnel valley to the Spittal of Glenmuick with 15 minutes before the cut off.

We had run 40km, far over what we had predicted, and were exhausted. Yet, it is always incredible how quickly one can forget discomfort – a change of clothes, seeing Megan and Issy alive and hot chocolate meant that within minutes we were committed to go out again the next day.  Outi was running 4 months pregnant and put our gripes into perspective. I learnt later that Andy had been harbouring constant thoughts about quitting, having a bath and leaving me alone on Day 2. As we settled into camp and the trees danced in the wind, I realised I was hooked and would be back next year. 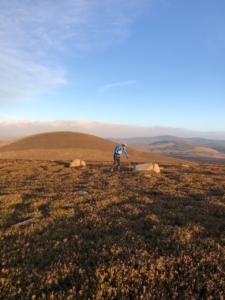