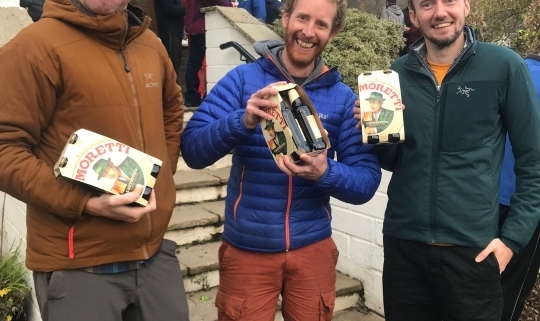 I’d had a decent block of training behind me, but I’d missed two and half weeks to the cold. I was feeling good, but it had been a busy week. I was fit, but I didn’t know how fit. But I wanted to win and thought I might be able to.

I started strong, soon finding myself at the front of the pack. I stayed in that position till about mile 2 when Robert Harrison (the eventual winner) caught me. We had had some exciting racing till about mile 6. You only have a finite number of moves you can make in a race and if you use them in the first half that’s it – I knew putting up a fight early on was risky, but I wanted to win. Robert got away from me at the turnaround. I decided to settle down to about 30s behind him, figured I was good for 2nd and if he started to falter I was in a position to take advantage.

That plan lasted until mile 9 when the wheels came off dramatically; drained of all energy, legs not doing what they’re told, nothing playing ball and reduced to a jog. I’d overplayed my hand and now I was paying the price.

I limped along for the last few miles. James B passed me looking strong – later winning a sprint finish to get second. Even (not the fittest) Niall caught me with half a mile to go (“My feet hurt.” “F*ck your feet and go catch that guy.”) Go big or go home, and I came home with my tail between my legs. The beers for second men’s team were small consolation.

I should also say – the weather was pristine, Glen Clova was looking lovely, the course delightful and the race was an well organised friendly affair. Definitely worth another go. 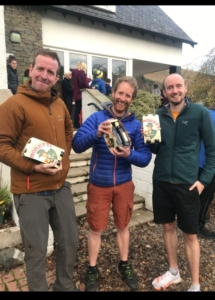