OK, I’ll take my own medicine.

I’d spent more time on pedals than in trainers this summer and I wanted to test out the ol’ Chris Hoys in a competitive setting. The Dukes Weekender had been on my radar for a few years, so what better time to try out my local two-day gravelfest.

Saturday was the hill climb – a 1.2km all out effort on the trails behind Aberfoyle. Driving up I reflected on the fact that this would be my first ever bike race and I really had no idea what I was doing. I wasn’t alone, chatting to a couple of Fellkour lads in the car park we all agreed to being green hill-runners out our depth.

Queuing up at the start line I decided to budget for a 5-6 minute effort, there was no excuse not to go out hard. When I went through half-way in 2 minutes, I realised I’d probably misjudged so needed to re-double efforts. The course was packed with cheering crowds (thanks Lucinda!); coupled with burning lungs & acid-drenched legs this made for an exhilarating experience. I crossed the finish line in 04:22 and collapsed on the ground, taste of blood in my mouth.

I was 24th, which is not bad for a first go. But in a race where seconds mean places every gear slip, misjudged bend and poorly-timed surge assumes an absurd significance. Brute strength and ignorance I’ve got, if only I could ride a bike.

The evening was a sociable one in the campsite, albeit constantly checking my phone to see if Will had text about a pint. I got into my sleeping and decided to read the latest Westies race reports before going to sleep. Didn’t take long.

Sunday was the enduro. A 72km route around Aberfoyle with six timed sections, taking 90s-5mins. This made for a surprisingly sociable day. Sure you went all out for the efforts but in between no-one wanted to push it, so it was fine to cruise around, join groups and chat to different people. The competitive side was more challenging today, with downhill portions rewarding bike handling ability more than raw fitness and the less said about the 90s hill sprint (fell off twice and ran, pushing my bike, the last 100M) the better. I gave it my all and I can honestly say that at the end of the last section there was no speed left in my legs. I finished 42nd.

The Dukes Weekender is a good laugh. I could get into this bike racing thing. 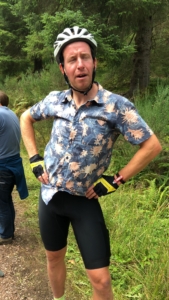 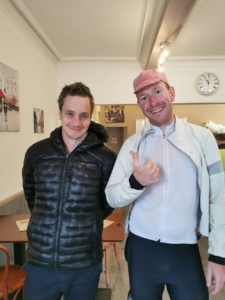 A Tale of Two Breweries
Scroll to top