Finding myself with an unexpected free Saturday, I signed up to the Two Brews a few days beforehand. The day was bright and clear, and the pre-race milling about was spent in the delightful settings of Traquair house. Very civilised, with tea and cake as we saw off the early starters. There was a lot of expectation-management going on in the Westies group with people talking about heavy legs, lack of preparation and this being a training run; no-one was quite sure whether to believe anyone else’s modesty as we lined up on the start line.

The group sets off at a fair lick down the first couple of kilometres of road, before turning off onto the first climb. Alwyn and Niall disappear off the front, never to be seen again. The first climb is steady, and there’s a fun fern section to break it up a bit. It’s not long before blood is drawn, with Romy taking some barbed wire to the face during a fence crossing. The head wound doesn’t seem to slow her down.

I don’t really have any idea what I’m aiming for as I start the race, but as the first few kilometres disappear and I get an idea of the pace, I work out that a good goal would be to aim for under 4 hours. At the end of the first hour I’ve done exactly 7.5K, and it looks like it might be on.

The first descent starts out gentle then steepens. I find I’m flying past folk, reassured by the abundant heather of a soft landing if / when I cop it. It’s followed immediately by almost a mirror-image climb, steep then levelling out to Hundlescope Heights, the cima coppi of today’s route. This climb really saps the legs, and we’ve still got a long way to go… From here it’s a plod across some bog and contouring round Broom hill, then up to Stob Law and checkpoint 3. At this point we’re slightly under half of the distance, slightly over half the climb. This section was probably my favourite in terms of scenery – it’s a fantastic view over the surroundings, with a line of runners stretching out into the distance.

Although I’ve not really put much thought into this race, I do have one solid goal: to look cool in at least one race photo. I’ve never managed this to date, but I am aware that it’s something that is theoretically possible. I’ve got a secret plan that’s going to help me achieve this – finger guns. There are a few photographers dotted around the course, and whenever I spot one I execute the plan. 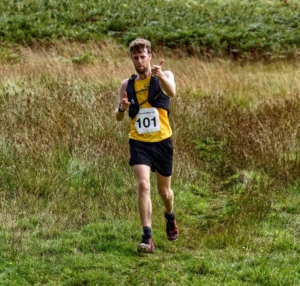 Coming down from the halfway point I spot the yellow tshirt of Ian T picking his way down the hill. He’s taking a slightly longer route than necessary, and I set off on the direct route at a fair lick. This is a mistake. For what feels like the next 20 minutes I tumble down heather and pathless terrain, getting no closer to Ian as he plods along without breaking a sweat, completely oblivious to me and my efforts. I eventually catch him just before checkpoint 4, and cynically take advantage of him being distracted by wellwishers to scamper away.

The next climb takes me completely by surprise. I hadn’t really paid any attention to it on the map, but it’s an unforgiving straight line up a firebreak which seems unreasonably steep for this stage in the course. It’s a slog to the top, but the reward is a tangfastic from James C, which makes everything seem worthwhile. With this we’re off downhill again, and there’s somehow only one climb left in the race.

Before the climb there’s a fair bit of ground to cover though, and I’m starting to flag. My lack of planning extends to not really thinking about race nutrition. I’ve defaulted to what I would normally take for a normal day out in the hills, but it doesn’t feel right to stop for wraps and a pear. I settle for a packet of crisps and some fudge on the path up from Stobo. This should be run-able, but my legs aren’t really having it.

Before too long we’re at the last section – the notorious climb up Trahenna. Received wisdom is that you should save some energy for this, as it’s a short but sharp ascent. There’s no great trod, so it involves a fair bit of heather-bashing. I take the route round the woods on the approach, and try to hype myself up for this last climb. It’s slow, too slow if I’m going to make it back in under 4 hours. The cloud pulls in and it starts to rain sideways. Once at the top it’s all downhill, but there’s still a good 3K to go to the finish. It’s a slightly tricky contour round the side of the hill, before a steep descent, and suddenly we’re on the flat again. I’ve got 5 minutes to make it back and this might just be do-able if I push it. I try to accelerate, and the last few minutes are a tense race against the clock. At the finishing straight I’ve got 30 seconds to go, and I’m so flustered I forget the number one goal today, throwing some devil horns the way of the photographer. 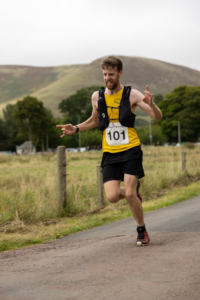 The Two Breweries has everything: varied climbs, good descents, cracking scenery, ridgey bits, woodsey bits, and good vibes. Everyone I spoke to was excited to be back at an event like this, and the post-race was exactly what a post-race should be with plentiful free beer and food, and good chat. All credit to John Hamer for organising, and thanks to him and all the marshalls for a great day out.

Yorkshire 3 Peaks race – I can’t stand up for falling down!
Scroll to top