It was in the balmy days of summer that JD and I agreed to run the Tour de Helvellyn, a 38 mile, 2000m, run in the Lake District held on the shortest Saturday of the year. JD pulled out early with a dodgy knee but Dave (I’ve not trained for this) Rogers was in, although there was no chance I’d be fast enough to keep him company.
Previous years have had very challenging weather but thankfully this year it was just a bit dreich, which spoiled the view but didn’t limit the visibility enough to make navigation difficult. The route is a lollipop starting and finishing in Askham, near Penrith, going along Ullswater via Boredale Hause to Patterdale then up Sticks Pass and over to Thirlmere. The loop round Helvellyn takes you back via Grisedale Tarn to Patterdale, then you track back to Askham. It’s at the start and finish crossing Askham Moor that the nav is potentially the most difficult, the moor is fairly featureless, crisscrossed by paths and trods, plus it is most likely dark – unless you’re very fleet of foot. Pleased to say I made it round without getting lost made some new friends and met some old friends, I even saw Dave briefly at the start, but some days finish times are not that important, good times are.
Nearly 700 at the Pollok Parkrun on Xmas Day – not my fastest 5K of the year but not the slowest and it is nice to get out for a run before eating your body weight in turkey and roast potatoes.
A week after the Tour, another dreich day, another race, this time with JD in tow. A somewhat shorter double header – Drumchapel Parkrun and the Xmas Handicap. Both are short hilly lung busting runs. It was my second time at Drumchapel so it was nice to get a one minute PB (and beat JD). The Xmas Handicap takes place just up the road at Carbeth so there was time for a second breakfast of bacon butties in Waitrose cafe before donning the fancy dress (I’m. sure photo’s exist) and trying to get the best handicap. Seven Westies ran, one couldn’t find the start, Chris Furse stormed through to claim victory I think (I’m sure there are results somewhere). In am moment of weakness I let JD go before me and he got his revenge, but more importantly Ian Thurlbeck was absent so I claimed points in the Winter League and edged out in front.
What madness now befell me I cannot say but when fellow Westie Alex Osborne had sent me a link to enter the Hogmanay Trossachs Trail Marathon (a new event he is trying to get off the ground). I had initially rather rudely dismissed it, well I had just completed a 38 mile run. The weather was looking promising and the legs felt okay, what else would you do on Hogmanay but go for a nice run in the hills? Alex very kindly let me in even though the race was full and I became the eleventh runner.
Alex also organises a little one mile time trail in Queens Park and it seemed like a good idea to give it a go the day before. It probably wasn’t but it was good fun. 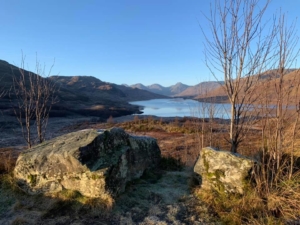 It was a bit foggy down low in Kinlochard at the start of the marathon but as we climbed up through the forest the sky cleared and the views opened up. There can be nothing finer than the view across Loch Lomond to the Arrochar Alps as you follow the trail towards Inversnaid. By the time we reached the turn away from Loch Lomond at about halfway my legs were beginning to rebel and my achilles were screaming stop at me on the big climb up from Loch Lomond. Fortunately, I had the good company of an old friend from the Glasgow South Road Runners to pull me along and my legs started to feel a bit better; Nick shot off a couple of miles from the end when we were being caught but I had no kick left in my legs and sauntered my way to the finish, via the local play park for a quick go down the slide.
Ne’er Day Parkrun Double Headers are a new tradition being a good cure for a hangover and sore legs. So, Pollok and Tollcross were visited for recovery runs. I’m not sure it worked because I couldn’t muster the energy and enthusiasm to get down to the Greenmantle Dash the next day.
I did recover enough for one more double header before the holidays ended. A loosener at Queens Park Parkrun followed by the Callander Crags Hill Race (and Mhor pies). The Crags race is a short sharp up around and down again with steep climbs, slippy rocks, squelchy bogs, mud, trail and tarmac. A good smattering of Westies turned out with the Beresfords pushing for prizes at the front, all of us cheered on by Brian Brennan.
Merry Xmas & Happy New Year. Back to reality.

A rally call to run XC championship
Scroll to top