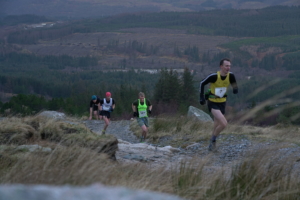 I’ve been trying to beat Niall in a race for a while now, first it was Cyclists V Harriers where a number of runners took Niall the wrong way, only for me to then pop out in front, but somehow he still managed to get past me again and beat me.

Never mind, I had a great idea for Aonach Mor, plenty of Whisky the night before. It was all going so well on the 31st, 1 measure for me, 3 measures for Niall. He’d brought his own beer, so declined a few 8% bottles (dam) but stayed strong on the Whisky all night. The bells rang, and after a few more drinks (excellent) we eventually went to bed. Only the morning will reveal the true scale of my plan.

We all arose to the smell of Tom cooking bacon, and hopefully the sounds of a thumping headache? I was of course fine, but what about Niall? He was quiet, maybe that was a good sign? He said he felt fine.

On the start line he clearly wasn’t feeling his usual self as he had a jumper and a vest on, maybe he’d resigned himself to a slower run, hence the jumper?

It’s only 4km (and all up, all 610m of it), so going hard from the start was essential, which I did, but so did Niall. 10 minutes in and I could still see Niall, but he was in front of me (again) Now out of the trees on a mixture of mega steep rocky sections and mega steep paths the gap wasn’t coming down, in fact, if anything it was growing, and by the top boardwalk section he was gone, the gap had gone, and my hopes had gone, and in the end I finished 30 seconds down on Niall. Well done mate. He later admitted severe Whisky burps, but then realised I was getting close so decided to try.