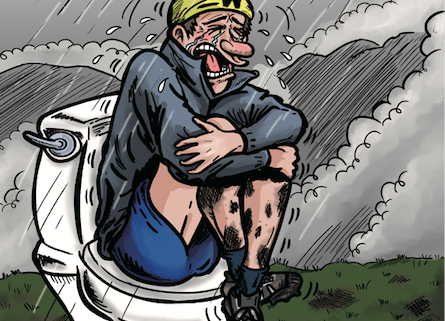 When I designed the Winter League it was a list of things that I thought only I could complete, and I was right. Nobody else has managed to complete every challenge so that means that I must be the winner.

I thought about including the rule that I must win in the small print but I didn’t. John Quinn was shuffling about complaining about a sore knee and how much he missed the Zumba class at his gym during lockdown, retirement seemed to be slowing him down. Unfortunately, the temptation to get his name etched on the plophy (plate/trophy – JQ invented it) for a sixth time and eclipse the record of Chris Upson was too much, and he has worn a groove in the Campsies, Springburn Park and round the Lock 27 Time Trial (sometimes all three in one day).

He was pursued hard by team Romy and Elspeth (I still think they were taking it in turns to run with each others watch) and despite running multiple marathons and hitting the Campsies hard Elspeth couldn’t close him down. She has earned the dubious pleasure of being the women’s champion, I say dubious because there’s only one trophy and it goes to the overall winner. Your achievement will be immortalised on the Westie’s website.

So it is done. The Winter League has been fun, over 80 Westies have scored a point, some of them probably unwittingly because I just happened to spot their run on Strava.

It has caused a certain amount of madness, and not just for me trying to keep track of the points. Not many people think running every day for a month is a good idea, but a Marcothon made up of Dumgoyne ascents could get Ross Anderson sectioned but in the Westies it just made Tom Elliotte think it might be a good idea to do it up Arthur’s Seat in Edinburgh for RED January.

The Campsies have proved to be popular with nearly 200 visits to Dumgoyne and Dumbreck has never been so popular. The challenge of completing a round of all the Campsie Trig Points (proper crazy) was taken up by a few, myself and Chris Furse, Romy, Saki and Paulius (who is claiming the FKT with 6:25:52). It’s there to be done and a grand day out, it’s not just for the Winter League, a race maybe?

A long the way some people have blagged points they didn’t deserve based on their imaginative interpretation of the rules. I was so tempted not to give Ali Boyer a point for his 10K Canal Patrol on the Erskine Bridge because he wasn’t close enough to the water. Rob Hamlin got a point for doing a Junior Parkrun, it’s a good job that didn’t catch on. JD scraped his way up the leader board by hunting down every trig pillar in South Lanarkshire and running every day in January, and shamelessly trying to claim undeserved points.

It gave me no pleasure to only give Niall and Will 3 points for their 8 trig point round in the Kilpatricks, if they hadn’t stretched it out to a marathon (26.4 miles is not an ultra Will!) they would have got nothing. This pair also deserves a mention for their Parkrun Duathlon – all 7 Parkruns (at a pretty good pace) in one day cycling between the parks.

Gregor slipped down the leaderboard after storming off into an early lead but the image of him sitting down in a bog for a wee cry after trying to run a straight line between Hole Head and Dumbreck will be my abiding memory of the Winter League.

JQ presented me with the plophy, when I first won it two years ago, in the car park of the Clansman just before the Ben Lomond Hill Race – a grand tradition that will be maintained – see you there in 2022 (it’s cancelled this year).

More on the Westies Winter League
Scroll to top