The space in the bed next to me is empty when I wake up. I must have slept it. I doze for a while then shuffle downstairs for breakfast. There’s a serious-looking A4 brown envelope on the kitchen table. I open it and peek inside. The door opens behind me.

‘What’s this all about?’ I ask my husband.

‘We could have a conversation about it at least?’

‘I’ve been trying to have a conversation with you for the last three months but all you can think about is POINTS!’

‘But you were fine with me heading out? You could have said? Every time I checked with you, you seemed fine.’

He shrugs. ‘You just went too far.’

‘Was it the canal marathon? Surely it wasn’t that, I mean, if it was that… that was only 7 points! And it wasn’t even my idea – Elspeth planned that one!’ Blue skies, sunshine, frost. Those weird frozen flower things growing out of the tree branches.

He laughs. ‘No, it wasn’t that one that pushed me over the edge.’

‘One of the long reps at the Campsies? The out and back 20 pointer from the distillery before Christmas? At least that would have been worth it, for the 20 points I mean.’ The snow, the frozen toes, oh, the frozen toes were bad that day.

He shakes his head.

I sip my tea and think. ‘Ah, got it! It was the ultra across all the tops? When I was gone all day?’ Triple points for the 7 trigs, plus an ultra. 25 points. Sunshine all day, clear blue skies, the deep snow gone and the bog still frozen. Magical.

‘No. That was okay, I mean that was just one day.’

‘The running every day in January thing,’ he says.

‘You always said you would never do that! And the complaining! The “Oh, but I still need to do my run”’.

He slams the door on the way out.

Fair point. But at least it was 31 points.

I wake up again, or rather, I wake up properly, and realize that was all a dream. There’s a lump in the bed next to me. I turn to grab my phone to check the time. A sigh of relief escapes me when I see the date: 1st February – the Westies Winter League is finally over! I think I’ll not run for at least a week.

This is what I had imagined the end of January to feel like. Unfortunately, on 20th January, my body gave up on me – a sign that the Winter League made me push myself harder and run more and longer than I’ve ever done before.

The League was announced on the evening of Thursday, 12th November. The same day, I had done a 10K run along the Clyde from Whiteinch while my son was at his Parcours class, and my first thought after scanning the rules was “That could have been a point!” So I guess the obsession with claiming points started early on, but I certainly couldn’t have imagined the runs I would go on to do.

The league certainly came at the right time for me, with residents in Glasgow limited to travelling 5 miles outside of the city boundaries and thus banned from the big hills. It provided a great motivation and focus to get through the weeks ahead and have a purpose to running. For me personally the fun part was to think about how to combine different challenges in a creative way and earn the most points with the least amount of running – such as a night trail half marathon along the river = claiming points for a trail half marathon and 2x10ks along the river. (Although Fullwood might have not agreed with this, he also did this himself in Chatelheraut country park.) Less devious combinations of challenges included Chris Furse’s marathon including 2 park runs, the Lock27 TT and a 10K canal patrol (7 points). Similarly, Elspeth did a marathon including 3 parkruns (also 7 points), and the two of us also did a marathon including 4 x10k canal patrols (8 points). Andrew Fullwood himself pushed this one step further with his Hogmanay marathon in Queens Park (11 points).

Well done to everyone who has taken part in the league, and congratulations to our winners John Quinn and Elspeth Berry, whose hard work and dedication has paid off – but maybe points should be deducted for not having completed a full Campsies round?

I thought it would be fun to bring other runner’s best moments from the winter league, so read on… 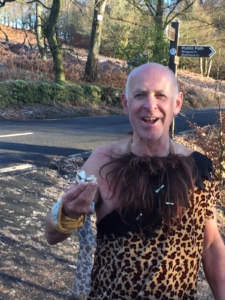 Name: John Quinn
A Westie since: November 2009
What I liked most about the WWL: Running in the Campsies in the snow with clear blue skies
What I liked least: The pressure of Romy and Elspeth nipping at my heels, and JD’s attempts at gaining dodgy points.
Personal highlight: The Burdens leg 4 Dumgoyne handicap after 77 days of running, 509 miles,74000 feet of elevation and still managed a sprint finish
Personal low point: Face planting in the bog between Cort ma Law and Meikle Bin
Most impressive run by someone else? Romy Beard’s Ultra round of the Campsie Trigs. How it is possible as a working mum is beyond me. 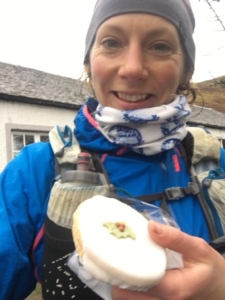 Name: Elspeth Berry
A Westie since: 2019
What I liked most about the WWL: Motivation to keep running throughout lockdown and to explore new routes.
What I liked least: I got bored of some of the routes!
Personal highlight: Highlights include glorious marathon in the Campsies in the snow and sun, some beautiful sunrises and of course the fancy dress Christmas cracker.
Personal low point: Low point was an aborted park run last week when it was too icy to run inside Queen’s Park!
Most impressive run by someone else? Most impressive run would be Romy’s campsie extravaganza 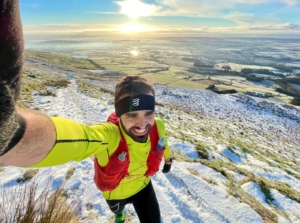 Name: Paulius Peciura
A Westie since: March 2020
What I liked most about the WWL: I enjoyed seeing how creative runs got over the time to score as many points as possible. New routes were being discovered just because of the league.
What I liked least: The continuous need to come back to Campsies for more points!
Personal highlight: The Two Campsie Trig Point traverses, one in the energy-sapping conditions with Saki where bogs were covered in light snow. I then came back for one more round on my own, trying to beat the previous time.
Personal low point: It must have been the bogs of Tomtain and Holehead to Earl’s Seat. When we did the Campsie traverse with Saki, we met Ally Maciver who flew by in shorts and made it look effortless!
Most impressive run by someone else? Oh, too many to name! So many impressive runs: John Quinn’s rounds of runs of different point categories seemingly every day, Elspeth’s continuous score ticking and Romy’s never-ending out and back runs from Dumgoyne to Dumbreck. 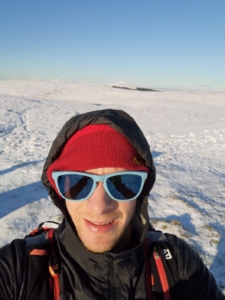 Name: Alwyn Poulter
A Westie since: Half-way through the winter league 😂
What I liked most about the WWL: All of it… We should have it all year!! I loved sunny days in the snow – made my lockdown. Also it’s the only thing keeping me marginally sane.
What I liked least: Dragging my arse over the Campsie bog, with snowy mountains in the background 😭
Personal highlight: Snow!!!!
Personal low point: So many 5km round the park in the dark!
Most impressive run by someone else? The two 7 trig missions

Name: Jenn Ruddick
A Westie since: 2017
What I liked most about the WWL: I liked learning about the route straight up CML from a Lennoxtow
What I liked least: I didn’t not like anything
Personal highlight: the weekend the snow made it runnable between ES and Dumbreck
Personal low point: running down CML with frozen feet in the dark
Most impressive run: Ross’ Dumgoynes 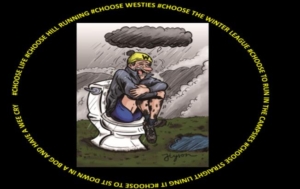 Name: Gregor Stewart
A Westie since : 2011-ish
What I liked most about the WWL: I like the fact that so many of us got involved/motivated. But specifically, seeing people do the xmas cracker in fancy dress was the real highlight !
What I liked least: Running 27km along the canal to do two park runs and get 3 or 4 points, when i could have gone to the campsies to get about 14!
Personal highlight: Felt good to be top of the league, for like 5 mins, right at the start, but quickly realised that it wouldnt last as im not a fan of running everyday for Marcothon/RED January.
Personal low point: Stopping halfway between Earls Seat and Holehead and thinking i wanted to cry as there was still quite a lot of running through bog and heather to go, but not really any other option available but to keep on going! That feeling kinda continued until i got to Dumbreck!
Most impressive run by someone else? Andrew Fullwood and Chris Furse’s round of the Campsies trigs. 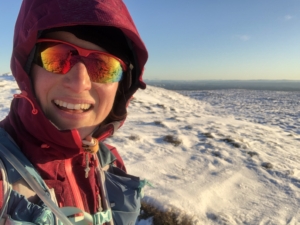 Name: Romy Beard
A Westie since: August 2019
What I liked most about the WWL: Getting up early for an adventure in the Campsies, running with Elspeth
What I liked least: Not getting my deserved points for the 9 trigs in the Campsies – having re-read all of the WhatsApp chat I still cannot find where Andrew said shuttle runs were not allowed !!!!
Personal highlight: Spending a day in the Campsies from sunrise to sunset, with the bog frozen over.
Personal low point: Frozen toes on the first couple of Dumgoyne-Dumbreck reps before the bog froze over.
Most impressive run by someone else? Andrew Fullwood’s Queen’s Park Marathon

Furthermore on the Westies Winter League
Scroll to top