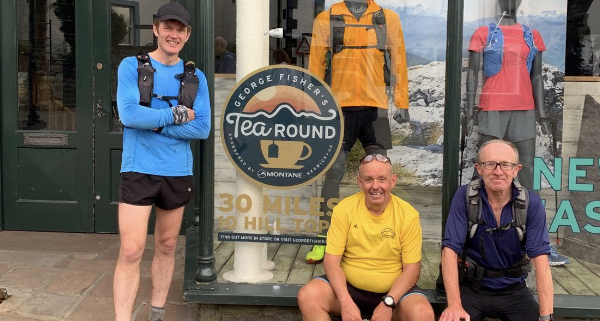 The Tea Round is a circa 30 mile run, with up to 12000ft of ascent, in the Lake District starting and finishing at the door of the George Fisher shop in Keswick. The route is based upon the hill tops that can be seen from the Abraham’s Tea Room on the shop’s top floor: Catbells, Robinson, High Stile, Hobcarton, Grisedale Pike, Eel Crag, Sail, Causey Pike, Rowling End and Barrow.

On the day we set out only the lower tops of Barrow, Rowling End and Catbells weren’t shrouded in low cloud and it stayed that way all day, but that didn’t ruin what was a fine day out. Myself and JD had set out early from Glasgow to meet Ian Collins in Keswick (a late edition to our team but a much appreciated pacer for our old legs) and we made good time and set off, touching the shops front door, just after 8am, with a 10 hour schedule in mind. 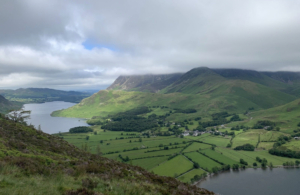 We had opted for an anti-clockwise round starting from Barrow based entirely on advice from Elizabeth, a Lakes resident Westie who had completed it in that direction a few weeks earlier. We made good time out through Portinscale to the bottom of Barrow and started the first climb up the grassy slopes before dropping down and up through the bracken to Rowling End. Turning back on ourselves we climbed up Causey Pike into the clouds and after an easy scramble to the summit there’s a nice run along the ridge to Sail and then it’s down through Eel Crag to Coledale Hause. There’s a bit of an out and back here over Hobcarton Crag to Grisedale Pike before heading to Whiteless Pike and Buttermere, which emerged into view as we descended.

There is a temptation to stop for a tea and cake in Buttermere but we pushed on and began the long steep rocky climb up to High Stile via Red Pike, going up the slippy rocks through the forest it made me glad we’d followed Elizabeth’s advice because it wouldn’t be much fun coming down, it wasn’t that much fun going up either. The navigation on the route isn’t that hard but back in the clouds  it saved time having the reassurance of Ian’s GPS and we made our way over to High Stile and picked our way down through the crags to Gatesgarth.

The last big ascent of Robinson was gruelling, back up into the clouds for the last time before a nice run down to Little Town and over to the last top Catbells. Ian was going well and shot off from the top heading for the finish and a time under 10 hours, after putting in a couple of sub-8 minute miles he made it with a few seconds to spare. Me and JD took our time and got back in 10:18, we would have probably been a fair bit longer without Ian pacing us – so big thanks to him (I’m sure he could put in a much faster time without us holding him back).

You would have to be pretty quick or set off very early to make it back to George Fisher to receive your free cup of tea in the café; originally your reward for completion was a cup of tea and a badge, now the route has been sponsored by Montane and Fix the Fells so there is a t-shirt too. A nice cold pint in a local hostelry is also worth considering. A couple more Westies have headed south to do the Tea Round and I’m sure they would agree it is well worth the trip, I think it might need another visit on a fair day when the view back to the shop can be checked out.

Lairig Ghru: This Is Not Happening