When my alarm went off at 11.15 the last thing I wanted to do was get out of my sleeping bag. Leaving work at 5 on Friday and cycling to Dingwall seemed like a good idea at the time. I mean it was, but stopping for pints in Pitlochry, shots at the The Vault in Aviemore and then making it to Inverness for a dram at last orders should probably have been avoided.

But I was here to race so I blearily looked out my vest and shorts. Annoyingly I’d left my Irocks in Glasgow. Cycling-shoes would be useless on the hill and I wanted to keep my Vaporflys clean for the pub. I rummaged around in my pannier…a couple of banana skins…some bungee chord…OK, not ideal, but this would have to do. Alan Smith was wearing Crocs on the start line, so I clearly wasn’t the only forgetful runner on the day.

I washed down my breakfast Snickers bar with a can of Lilt for vitamin-C and lit a cigarette while strolling over to registration. I took up smoking at Christmas to help with training – I reckon that if your arteries are clogged your heart has to work harder, so this is just a cost-effective alternative to altitude training.

Plenty of people milling around the village hall, a strong Westies contingent in attendance for the first champs race. I saw Sam storm out the front door and down the street – I later heard he’d been pre-emptively disqualified after loudly announcing his intention to follow a GPS trail.

I started strong in the race, just hanging off the back of Niall’s shoulder. As we hit the hill this gave me enough shielding from the wind to spark up another cigarette. A few puffs gave me a boost of energy needed and I nipped in front of Niall and just before the first plunge into the glen. Crossing the Abhainn Sgitheach barefoot – a slippy proposition in banana-boots.

Pleased to see Sam half-way up Cioch Mhor solemnly holding a placard with the words ‘Garmin Martyr’ in bold lettering. All the more impressive given how cold it was, plenty of late-season snow around.

Nearly at the top of the Cnoc a Breahcaich for the second time and I had a comfortable enough lead to stop at the trig point for a smoke and adjust the bungees on my feet.

Clearly an absorbing task as I didn’t notice that Finlay boy slyly nip past me, closely followed by Niall, Stu and another Lochaber runner in yellow jacket. Those guys are alright on the descents so I had to push a bit to reel them in before the end – not helped by having negative-grip on my soles for the duration. I caught them up just before the road and my superior road-running speed guaranteed victory, Niall coming in a strong second.

A solid start for the 2020 Championship with Westies picking up both team prizes and a handful of individual awards – good effort all round. As ever, everyone was fantastic company on the Saturday night, someone ask Rob where that crocodile came from. 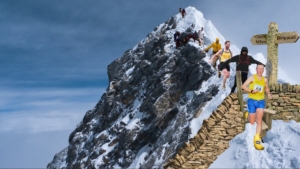