Dingwall seemed closer than the last time I went up there. It was like I hardly even glanced at my car before I found myself up at the Cioch Lhess start line. I had mixed emotions about my condition at the start of the race. Partly I felt prepared having run exactly once per day for some reason for the last while. Partly I felt tired having run exactly once per day for some reason for the last while. But at least I had a good night’s sleep – quaint little place with a comfy bed but, to be honest, it could have been tidier. The field was a little odd for a Scottish Championship race, many of the elite runners had stayed away and it looked mainly to be people going about with the pace of someone walking their dog. I was thankful for the recent bout of good weather because the ground was very firm, almost too firm really, it basically felt like running on Tarmac for the whole course. The nav for this one was pretty straightforward and the sunshine and high clouds meant you could almost see the whole course at any one time. Despite this, the route was a bit of psychological killer. I found myself running alone for most of the race and didn’t even come within 2 m of another soul let alone another runner. It was one of those courses where every time you get to the top of any kind of summit or plateau, you feel that the view hadn’t changed at all. But, as I slowly and consistently ticked off the 14 km and those 600-or-so metres dropped away, the finish line came into view and it was over before I knew it. Respectable time 1:36:27. No points. Usual outcome for this kind of affair. 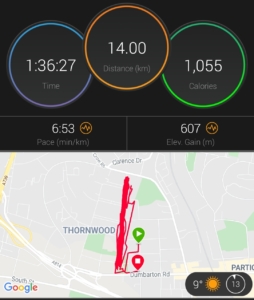