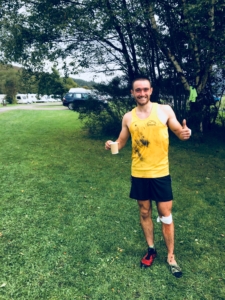 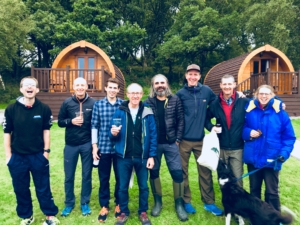 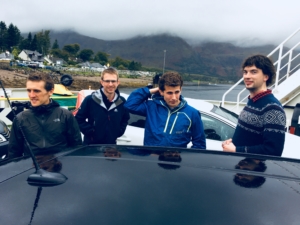 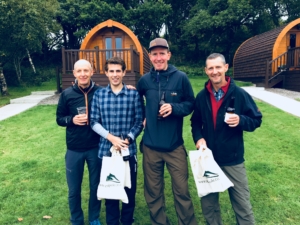 I left my flat on my own at 7.30 to make my way up to Ben Resipol, collecting runners along the way; Alistair & Dan in Partick, Sam at Crianlarich and Highland Hill Runner Ally Beavan in the lay-by by the Corran Ferry to make a full car by the time we reached the Ardnamurchan peninsula. Lots of people up for the final counter in the Scottish Champs made for one of those ‘quality’ fields. I’ll admit to being jealous of Ally being handed his brand-new tartan shorts at the start line.

Ben Resipol packs a lot in to its 7 or so miles; a mad dash through the campsite to get to the single-track trail, ten minutes of tricky twisty turny trods through the woods, boggy paths on open hill-side, craggy technical bits by the top and then a brilliant fun, mad-cap runnable descent down the whole length of the hill.

I was with Stuart Crutchfield of Lochaber and Manny just before the top, but once we turned around the pair of them shot off out of sight; my attempt to give chase lasted about 10s before decking it after a rocky step. I did my best to descend smoothly and gracefully but was caught by a group of five including Michael Reid and John Connaghan. Now, its one thing to lose out to a couple of highlanders on a steep descent but f**ked if I was letting some scruff from the Southside get past!

The rest of the descent was very enjoyable piece of ‘proper’ racing – multiple attacks & defences, no quarter given or asked, many an expletive shared, disastrous lines taken, bold moves to cut corners paying off and every possible trick or short-cut used. Despite all our efforts we were still together by the last half mile of road and I was able to put a bit of space between me and the rest on the flat to finish in a satisfying 10th. There were some excellent performances from other Westies – Manny & Don picking up category prizes and Tom finishing 6th despite a crunched ankle!

The after-race feed was immense – the home-made beer from the organiser’s Dad was particularly nice touch – and there was plenty of good chat to be had. Well done to David & co for organising probably the most enjoyable race of my season!

I. AM. SPARTAN!
Scroll to top