James asked me back in April whether I’d been keen to run in the Italian Alps. Any excuse to stock up on polenta and fine Barolo wine seemed good enough to me. A few months later Ally texted me about a visit to the Alps to come visit Leyre and I. Having spent the best part of 3 weeks glued at hip together I thought he might have already seen enough of me for one year, so I suggested maybe best if he coincided his trip with James and we made a bit of a Westies international kind of thing. The response was positive and with that, a plan was hatched.

The race was to be the Via di Annibale, basically a homage to Hannibal who supposedly crossed the alps via the Valle di Lanzo with an assortment of fancy elephants. If elephants could make it, then so could we.

Of course, underestimating the amount of time it would take to arrive to Usseglio from Geneva, we arrived very late on Friday night. James was determined to get at least 5 hours sleep and with a 4 am breakfast call we shortly became best pals of the owner of the hotel. After ramming a few cheese and ham toasties and multiple cups of coffee for breakfast, we made our way down to the village to the start. Unlike many big alpine mountain races, this was an Italian affair and with it, we were the only ones from outside Italy. Unfortunately, this also meant we were not aware that the highest point of the race, the Punta Costan, had been removed due to the risk of storms as our Italian didn’t stretch past Ally’s phrasebook. We did, however, know how to order 2€ ice cream and ask where the town hall was.

The course followed the rough form of an up and down race exact slightly bigger. Straight from the start,       we climbed. 2500m to be more accurate and then we descended before climbing another 500m. All this was followed by a 25km 2500m descent.

I held about 2 minutes behind James until the Col Sule at which point he upped the pace leaving me by myself for the next 20km. Up and down I went across a mixture of rock, snow, ice and grass until I finally made it to the top of the last climb. I had been completely by myself and I was at this point relieved to arrive at the Rifugio Tazzetti. It was therefore to my disgust that as I arrived to the refuge everyone waiting there started shouting “Prima-donna” “Prima-donna”. I mean, factually correct of course, but how did they know I was a prima-donna? Was it the pretentious swagger or just my dashing good looks that gave it away?

It then became clear that I was not the object of the chants and that in fact the “prima donna”, first lady in Italian, was hot on my heels. Feeling dejected, I began the long, long descent back to Usseglio. Needless to say, the prima donna put 20 minutes into me on the fast section the end. I did manage to sneak in under 7hours which was a goal, but the real bonus came as I was greeted at the finish by a Celtic warrior. You certainly don’t get that at Carnethy 5.

Soup, beer, spritz, cheese, salami, wine and a Celtic history lesson then proceeded as we watched Ally come in. 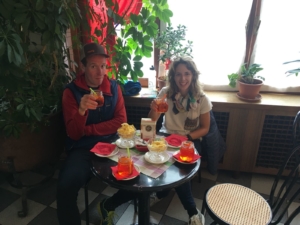 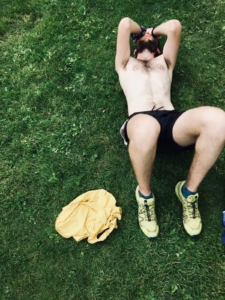 James finishing 6hrs12, myself in 6hrs59 and Ally in 7hrs50 in the marathon and Leyre was first lady, and sixth overall, in the skyrace in 5hrs45.

The prizegiving then came and after Leyre was given an excellent set of horns along with a giant bouquet of flowers, James was pulled onto the stage having won first international winning his first ever cup. Ally and I were then called to the stage (the reasons are still unclear), but we happily took the swag and said a few words. 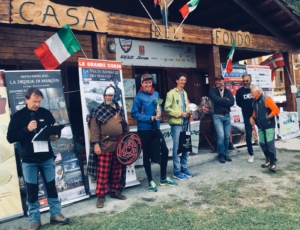 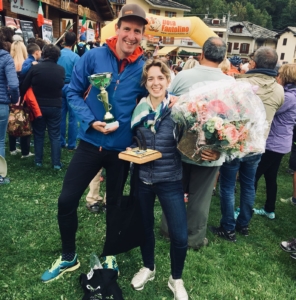 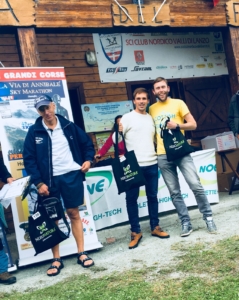 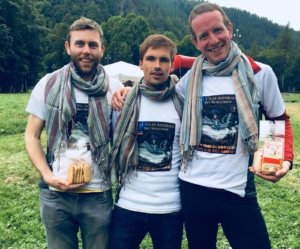 A huge thanks goes out to Simone Merlino, race organiser, who made us feel really welcome and to all the Celtic warriors at the end for reminding of us Braveheart so far away from home. For anyone looking for a Scottish style low key event with serious mountains, forget your UTMBs and Trofeo Kimas and get yourself over to Usseglio for a great race! 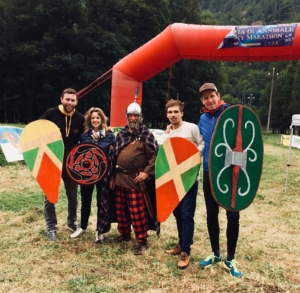