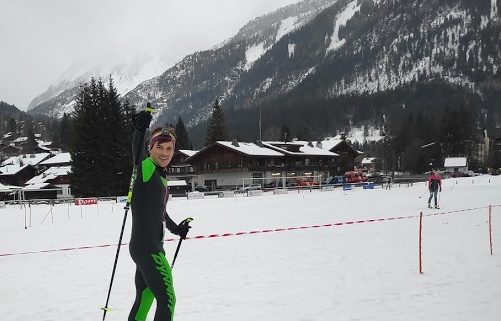 Finally this week we put the skis away until next winter. Leyre and I were pushing to squeeze the last spring juices out of a severely curtailed ski touring season given an unusually hot spring and some strange type of Coronavirus that some of you may have heard of back in Glasgow. Alas, the weather gods have decided it is not to be, so I in a sort of sad, reflective manner I thought it might be nice to recount probably the only race I will have undertaken this year back in February.

I generally look forward to winter in the alps. Whilst perpetual wind, rain and storm Barry batter familiar turfs of Western Scotland, grey skies in Zürich normally signify the imminent arrival of snow on higher terrains. Over the last two years during the winter months, I have more or less hung up the runners during weekends and concentrated on ski touring. Having ski toured for quite a while, I decided 2020 was to be the year where I dived headfirst into all the classic European skimo events.

A gammy knee put pain to January events, but February came around and I was raring to make up for four lost weeks. The first race on the schedule was les Diablerets 3D, a two-day race, consisting of a vertical race on Saturday night and a long course on Sunday. Coincidently, it also happened to be the Swiss (and unofficial Dutch) national championships, but in order to score you had to do the two races combined and the longer versions of both. As with most skimo races it was a team event and fortunately, I was able to rope in my flatmate in Zürich at the last moment after my original teammate had to undergo the small matter of keyhole surgery to his meniscus only days before the race started. No worries, we had already ski-toured many times over the last few years together and he had dragged me up many a mountain col on the bike when we studied together in France 8 years ago, so I was confident he was capable of getting around a piddly 2-day ski race.

The Swiss are often known as a serious nation and whilst I’ve always found this negative view of many an ex-pat to be massively unjust, this stereotype could definitely be applied to the attention given to the Swiss ski-mountaineering race scene. This is not a criticism, quite to the contrary, it demonstrates the dedication given to what is a relativily niche racing scene, even in the heart of the alps. What this did implicate, however, was that every competitor on the course had tailor-made race skis along with lightweight carbon fibre boots and race suit. On a side note, race suits are generally fairly garish, and not being one to miss out on the current fashion, I, of course, had perhaps one of the most hideous on offer.

For those not familiar with the many different facets of ski touring equipment, it is probably worth noting that trying to compete in the Swiss national skimo championships on a pair of fat powder touring skis is like trying to compete in the Tour de France on a full-suspension mountain bike with fat tires. With this in mind, despite generally being game for most challenges, my teammate did make it clear to me beforehand that he only had traditional touring equipment and not lightweight racing equipment. I reassured him that this would be fine and that probably 50% of the competitors would be the same with only those competing for the win would have full gear. Needless to say, that upon arriving at the start line on Saturday evening and seeing the field, we knew we’d be doing well to keep the leaders in sight.

So to the action… 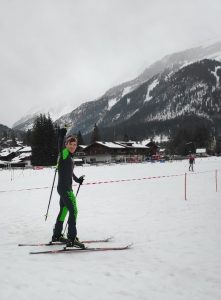 Saturday evening sunset start. 700m+ (2100ft+ for all you living in the times of the Empire) of vertical as fast as you can. Going uphill has never been my strong point but for efforts under 30mins I can normally just about hang on. The race start reminded me a little of a Scottish champs short course, full out sprint just to get ahead and breathing out your arse before you’d even managed a minute on the clock. The weather started to turn particularly foul, as storms rolled in from the north, lashing the first 200m+ of the race with torrential rain. This gradually transitioned to heavy snow as we gained height, but by this point, I was too transfixed on not being overtaken by the two 17-year old girls directly behind to notice what was going on around me (and of course, yes, they eventually overtook me). Then, after some 30 mins, like some miracle, it was over. My teammate came in about 6 mins later and left us sitting as a team in 50/61 overall after day one. Not too shabby I thought, knowing that tomorrow undoubtedly would prove a slightly taller task. 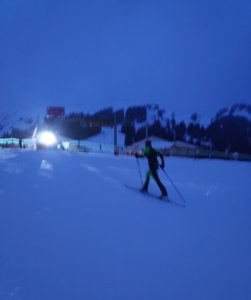 It’s typical that you wait all winter for the snow to arrive and then, exactly when you don’t want it, it all comes at once. Almost a metre of fresh snow meant that the original course had to be totally scrapped and replaced with a rather more mellow version to avoid the risk of large avalanches. Nonetheless, 40km with 2500m+ was the order of the day and after a 3-hour delay in starting, we were off.

As is typical of such races, the first 2km was a run with the skis attached to the bag and our strategy to go slow and steady was implemented from the get-go. After a mad scramble for space to put on the skis, we started the first major climb and settled into a rhythm which, of course, was far too fast to sustain for the whole day. It would have to do though, as lines of competitors filed single file in two well-tracked lines to zig-zag up the first 1000m+ of elevation. So far so good I thought. I felt decent and the sun was starting to really glare.

An hour or so later we made it to the first transition. I was lucky to have not ignored all popular opinion, not forsaking an additional bit of weight, and carried an extra pair of skins as the fresh snow melting to wet snow under the intense sun and track of the 100 or so people who had gone before started glueing and balling on the skis. Totally saturated and unusable, I was down to one pair for the remaining 1500m+ of climbing. For those of you not familiar with how a transition works in a race like this it’s normally a bit of a mess. Those looking to be at the sharp end should aim to be in and out within 30s (please see a video of my lesser contemporary demonstrating a fine example of such https://www.youtube.com/watch?v=4jk_3BCJrG8). What you really can’t afford to be doing when you have 10 transitions in a race, is taking between 5 and 10mins at each. Our first transition was a tad slow, 7 mins I calculated, but I reasoned that it might improve as we got into the swing of it.

Starting the first descent, 500m- or so, I knew we were not really at the stiff end of the race, but with 3 different concurrent races sharing the same sections, of course, it was hard to know how we stood within our race. 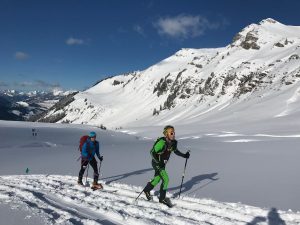 The course continued up and down in this manner for the following 3 hours, and it was on the penultimate climb that we began to slow substantially. Heavy equipment and beating sun all day had taken its toll on my teammate and whilst still going forward, it was apparent that we were not competing with the elite in the championships. However, we did have competitors from other shorter courses on our course and I was keen to race whoever I could. My teammate didn’t share my enthusiasm for this idea but quietly trudged on to the last climb which included a ski-on-bag hike to the top. With only a 1200m- descent and short sprint remaining I was keen to fly through the last transition, but when in Switzerland the lure of the ubiquitous cheese fondue is hard to avoid. Luck so than had it that volunteers had prepared a giant molten pot of the alps favourite dish along with a healthy serving of Valais speciality Chasselas white wine was on offer. I passed on the cheese but indulged in a second glass of wine, it would have been rude not to.

Cheese digesting we made our way down the last descent and into the last ski-on-back run along a slushy/boggy forest before finally arriving back in Les Diablerets for a ceremonial highland gamesesque lap of the park. With 800m to go then, we were in no real rush, we were clearly nowhere in our race and everyone else we had in eyesight were in the shorter races. That motive held true until I overheard the dulcet tones of the team in front of us, a father and daughter pairing. In Essex English as clear as day, the daughter was instructing the clearly empty father to “hurry the f**k up”. I clearly wasn’t going to allow the only Brits in the race to beat us and immediately informed my teammate that one final sprint would be required.

So despite the slog up until then, we managed a last 800m that David Rudisha, wearing ski boots and a helmet, would have been proud of and crossed the line about 20m ahead. Shallow, hollow victories such as this are particularly sweet and it was a fitting end to a thoroughly enjoyable weekend.

How did we finish in the end? Well, some people say that the racing isn’t important, it’s the journey, experience, [insert applicable cliché here] that is important. Of course, we all know that is nonsense. So in a time of 5h14m28s, some 3 hours behind the leaders, we finished dead last 61 out of 61. Onwards and upwards I guess. 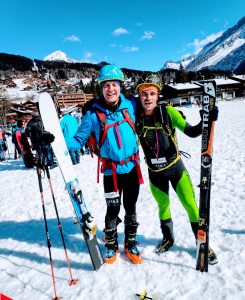