I kept repeating to Vilde, my Norwegian friend and well-appreciated organiser of the following proceedings, that Norway is ‘just the same’ as Scotland. This came with the caveats of it being 10 degrees colder, and therefore snowier, in winter and a fair bit more civilized (granted the bar is set quite low on this parameter).  By the end of the 10 days, she was interrupting Tim, a hardy mountain man from down south, and filling in the end of our sentences depicting parallels between the two countries and why they are just better than the Alps.

On the menu for Easter week then- Høgruta i Jotunheimen, Norway’s answer to the more famous, and in my opinion, less glamorous Skier’s Haute Route from Chamonix to Zermatt.

It was pleasantly balmy in Oslo upon arrival, so much so that a quick dip in the Olso Fjord was called for both after a pleasant run around some of the surrounding small islands that was to help condition us for the 6 days of skiing to come.

Høgruta traverses Norway’s Jotunheimen National Park, and ticks off some of the country’s highest tops (including Glittertind and Galdhøpiggen 2nd and 1st tallest respectively) and impressive glaciers. Starting in Bessheim and finishing Krossbu, the route covers a mixture of skating across frozen lakes, gentle drags up glaciers, steep skinning up faces and a fair chunk of skis-on-bag crampon and axe work in order to go up. Going down was also an eclectic mix of crappy wind scraped ice plastered 30deg+ faces, mellow and endless glides down 15deg glaciers, down climbing roped up and even some fresh snow south-facing turns. It tested Leyre’s, still green and maturing, skiing skills to a new level and tested the durability of my toenails and skin around my feet to a level of discomfort I had once never believed plausible.

I shall not indulge myself too much by waxing lyrical about each day in excessive detail, rather let the photos depict the surroundings and give a flavour of what I can only describe as a simply excellent journey across a wild and majestic landscape.

Snow cover was patchy but the long skate across the lake was all the easier for it. No objective issues en route to the first summit of the trip Bukkehø. If only the descent were so simple. Wind beaten on the top and south meant a backtrack was required and a 400m ski down a face where a fall would not have been fun. After this, a mixture of toe-pointing shuffling on crampons mixed with rock dodging on skis ended in a 10 hour day to start with and 20km 1500m+ of hard-fought-for stats. Given the poor forecast and accompanying snow in the east, we arrived at the cabin to find we were accompanied by only one other party. Double services of meat cake (apparently the translation I believe?) were duly swept up. 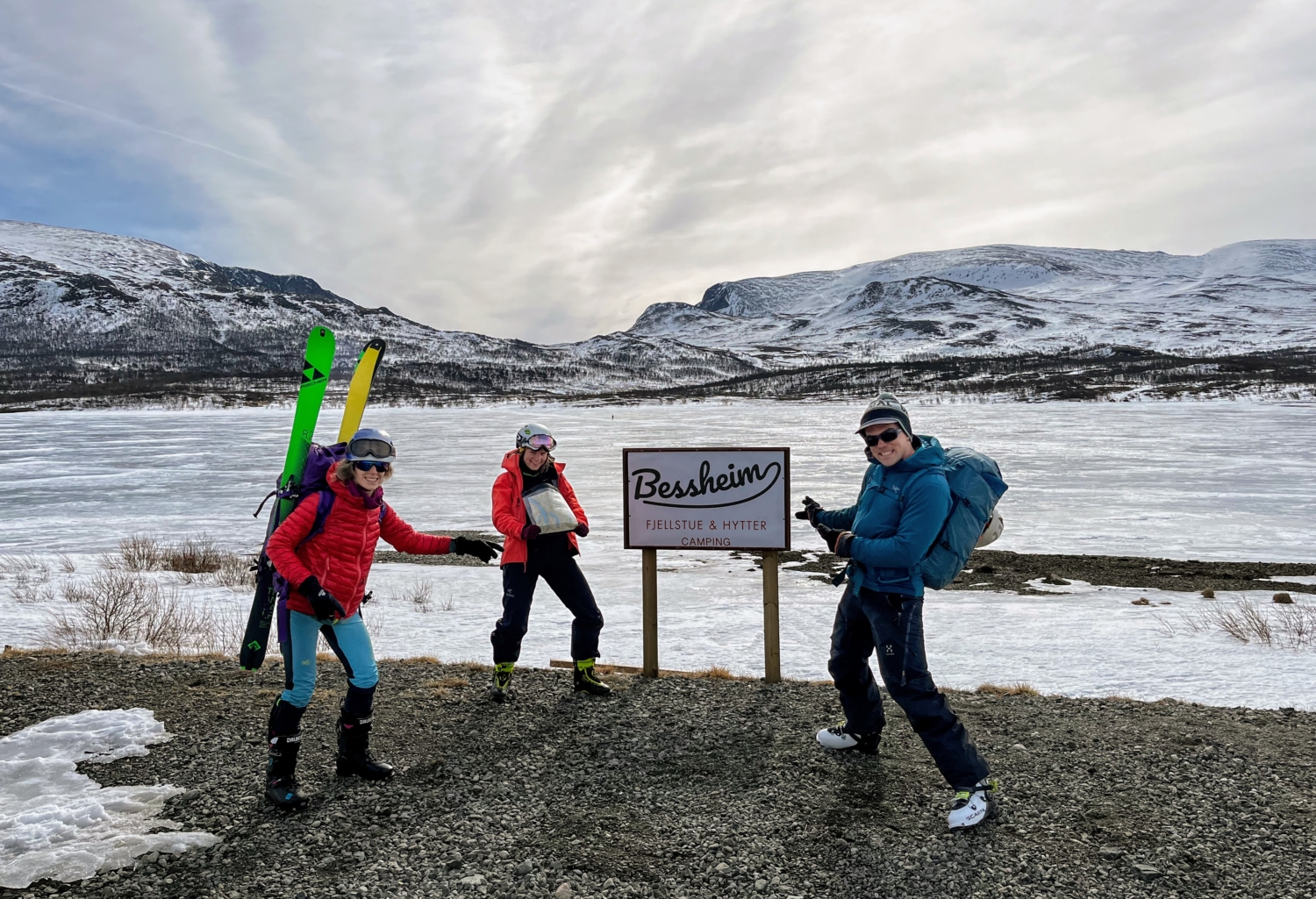 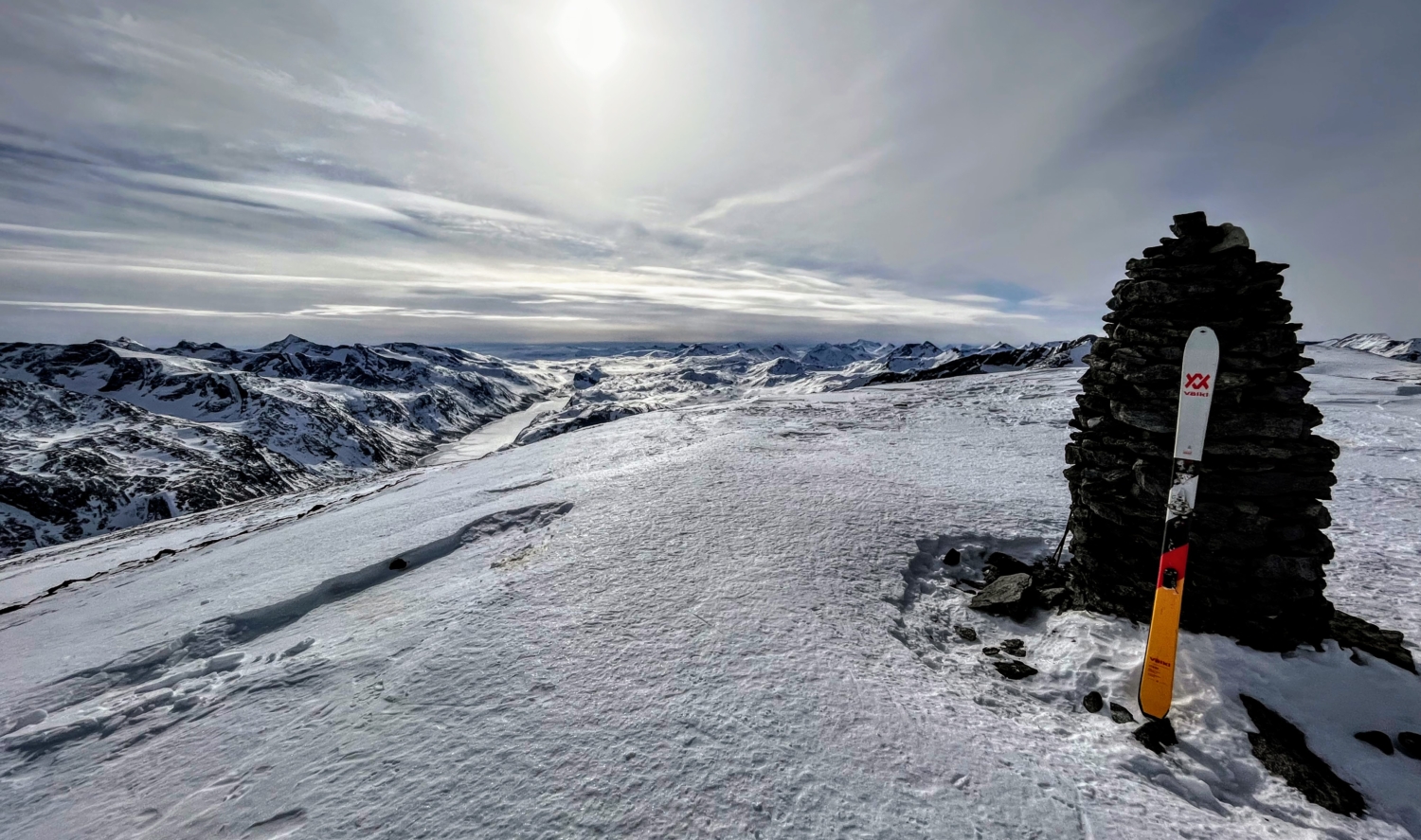 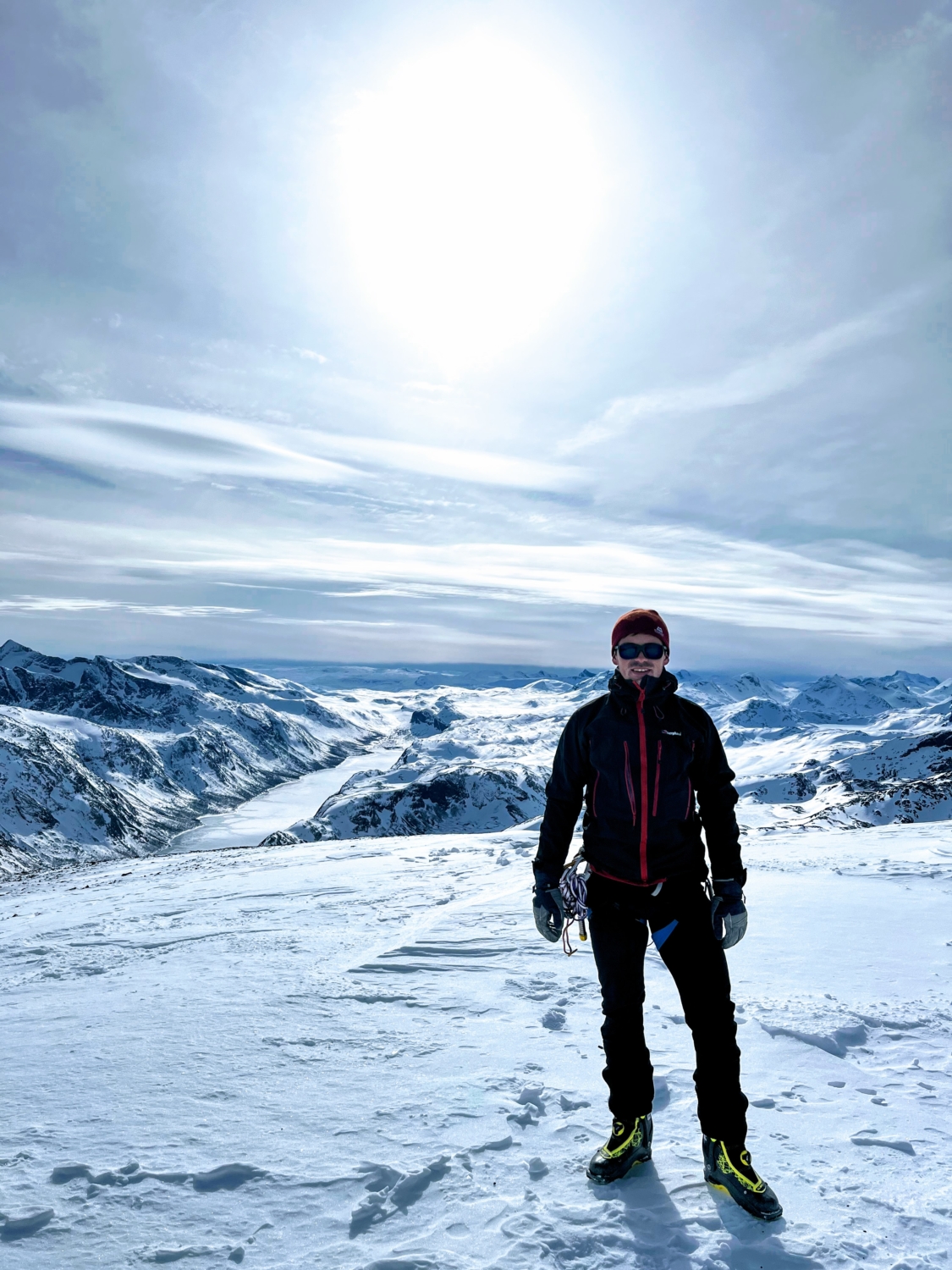 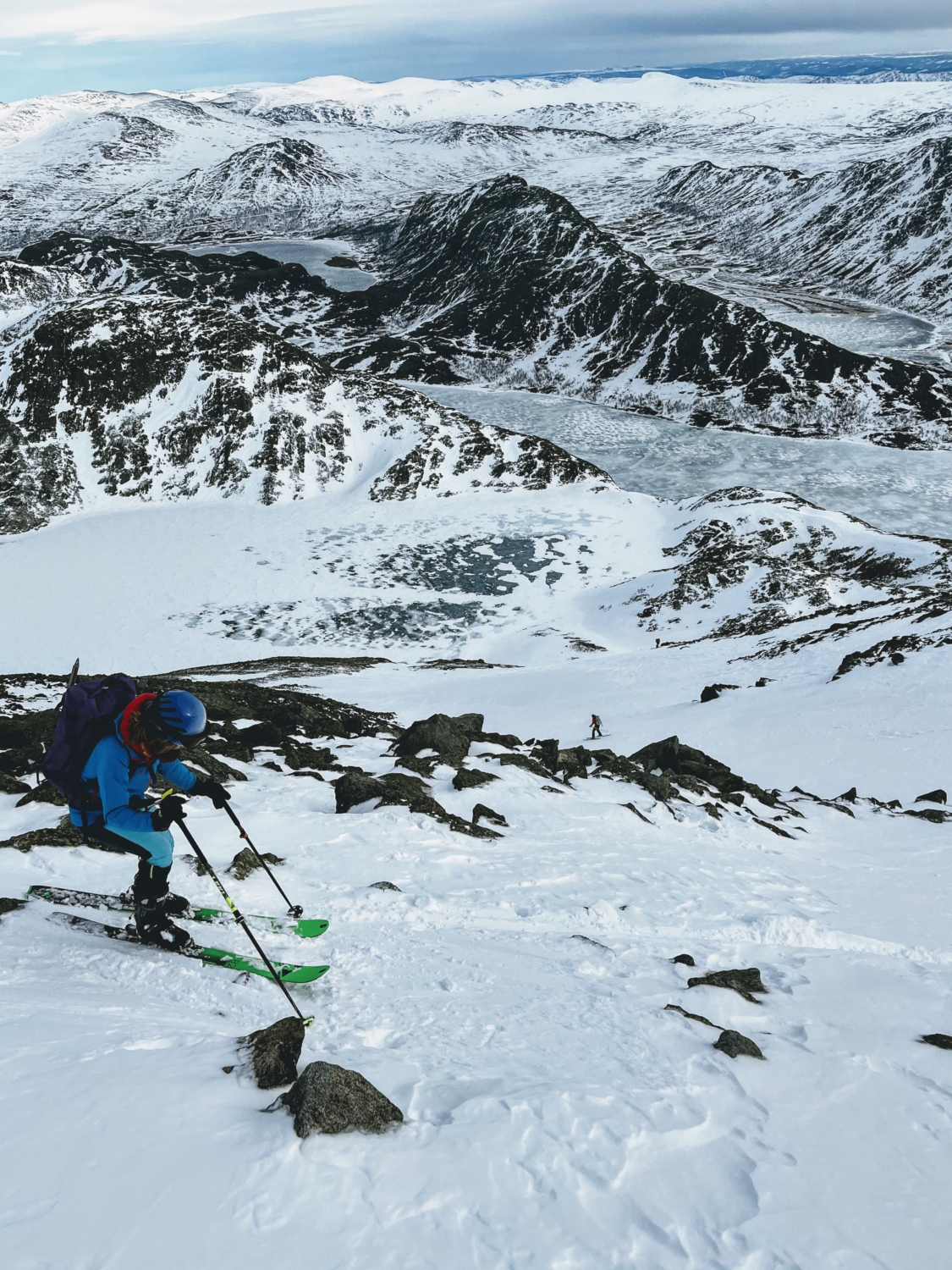 The forecast had for a fair morning followed by a medium to poor (said in shipping forecast voice) afternoon accompanied by snow and low visibility. The original plan foresaw a night in Glitterheim, however, after summiting the day’s summit Surtningssue late afternoon the cornice that predominately westerly winds had brought, meant that descending onto Styggehøbrean (glacier) would have been silly at best. With no visibility and few alternatives available to make it to Glitterheim, it was decided that a tactical retreat to last night’s refuge was in order. The problem being, that we had no reservation and no ways of contacting them. We chanced it and set off trying to arrive back before nightfall. Fortunately, upon arrival, they had space and more importantly hot food.

A last note on the day was that Glitterheim had also called to see if we were alive seeing as we had not made it there as planned. At the start of the day, it is standard that you write a detailed itinerary and if anyone has not arrived before a reasonable hour the huts start calling each other to see that all is ok. I can only commend this, bravo! 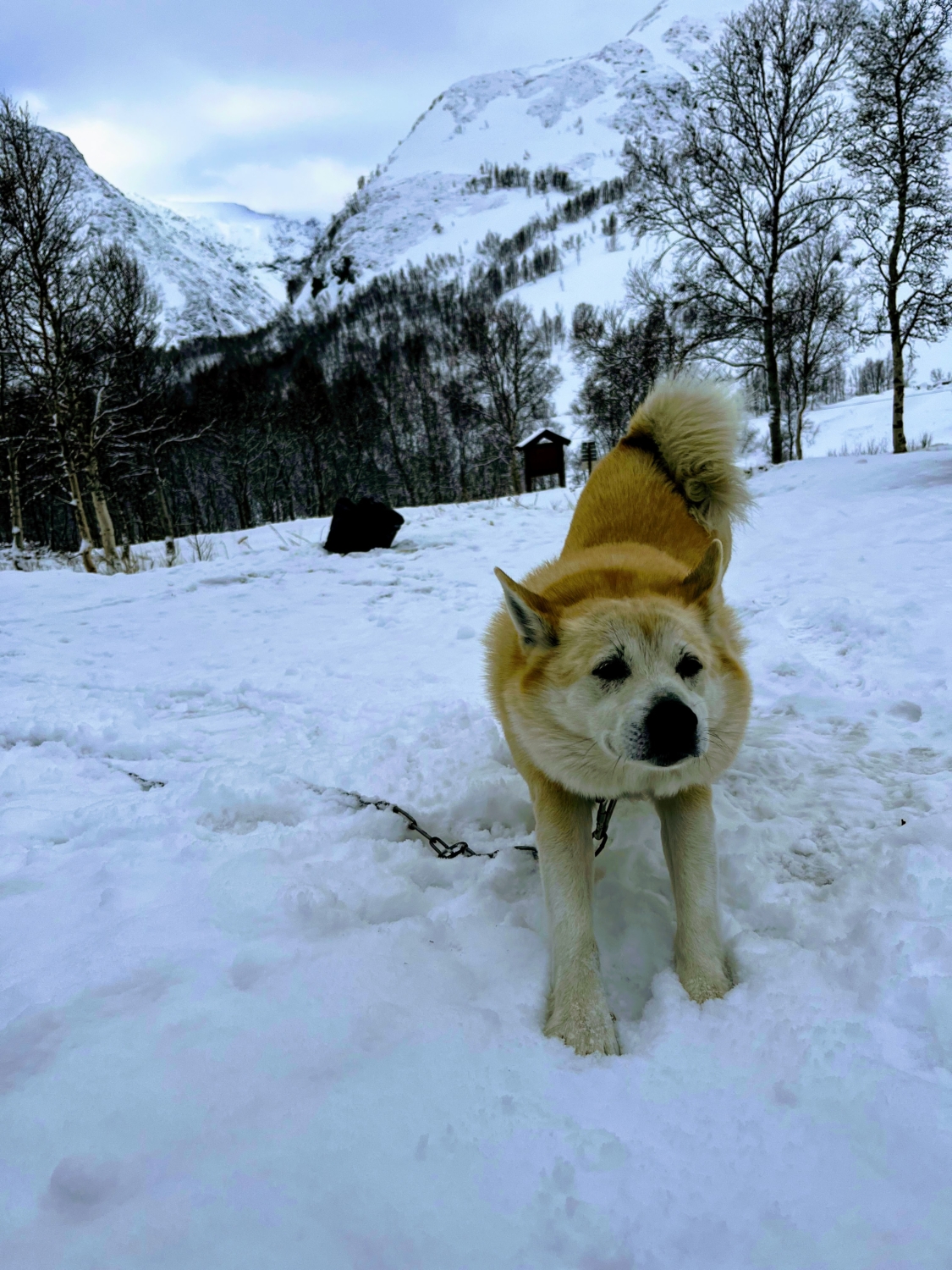 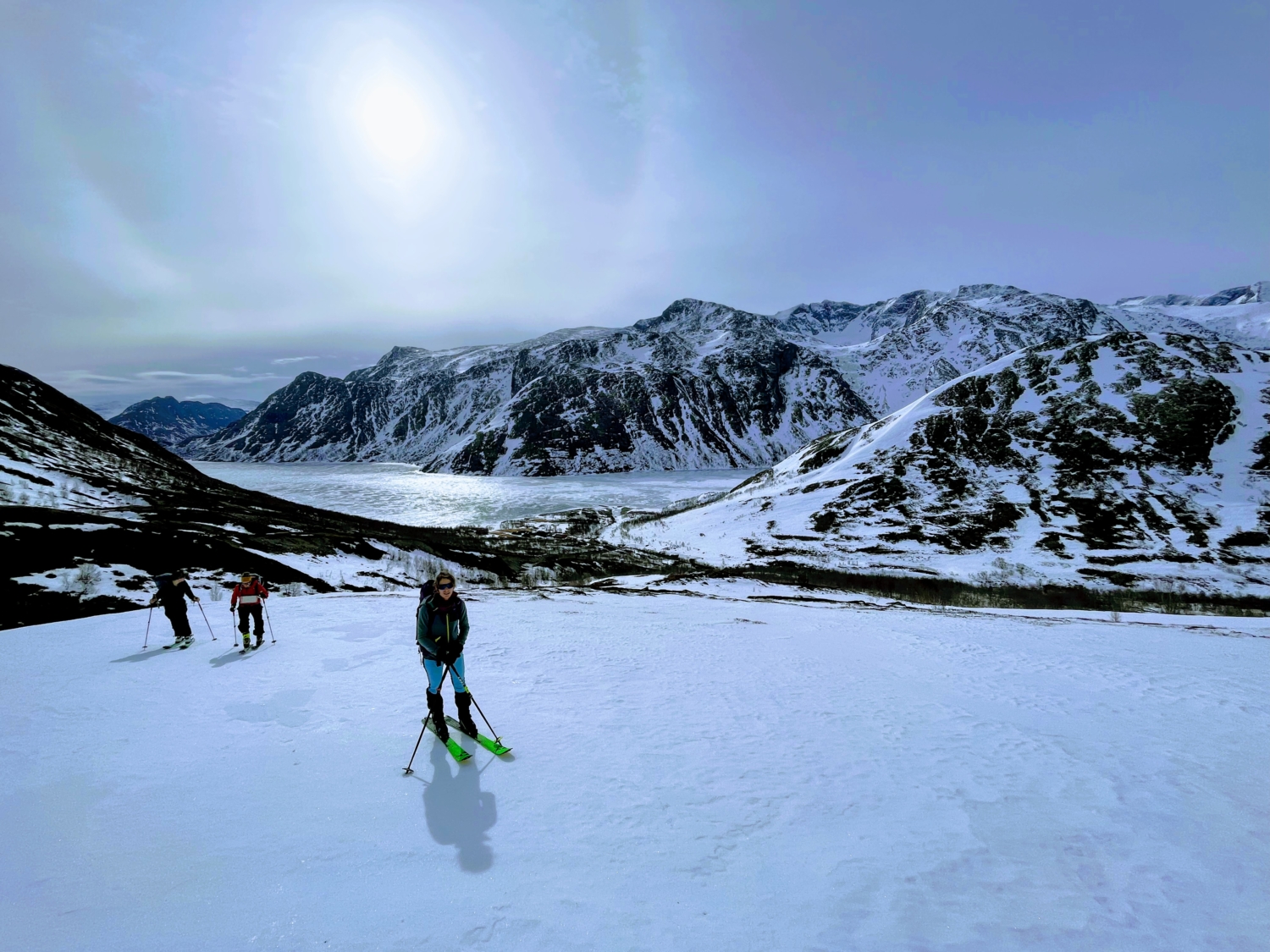 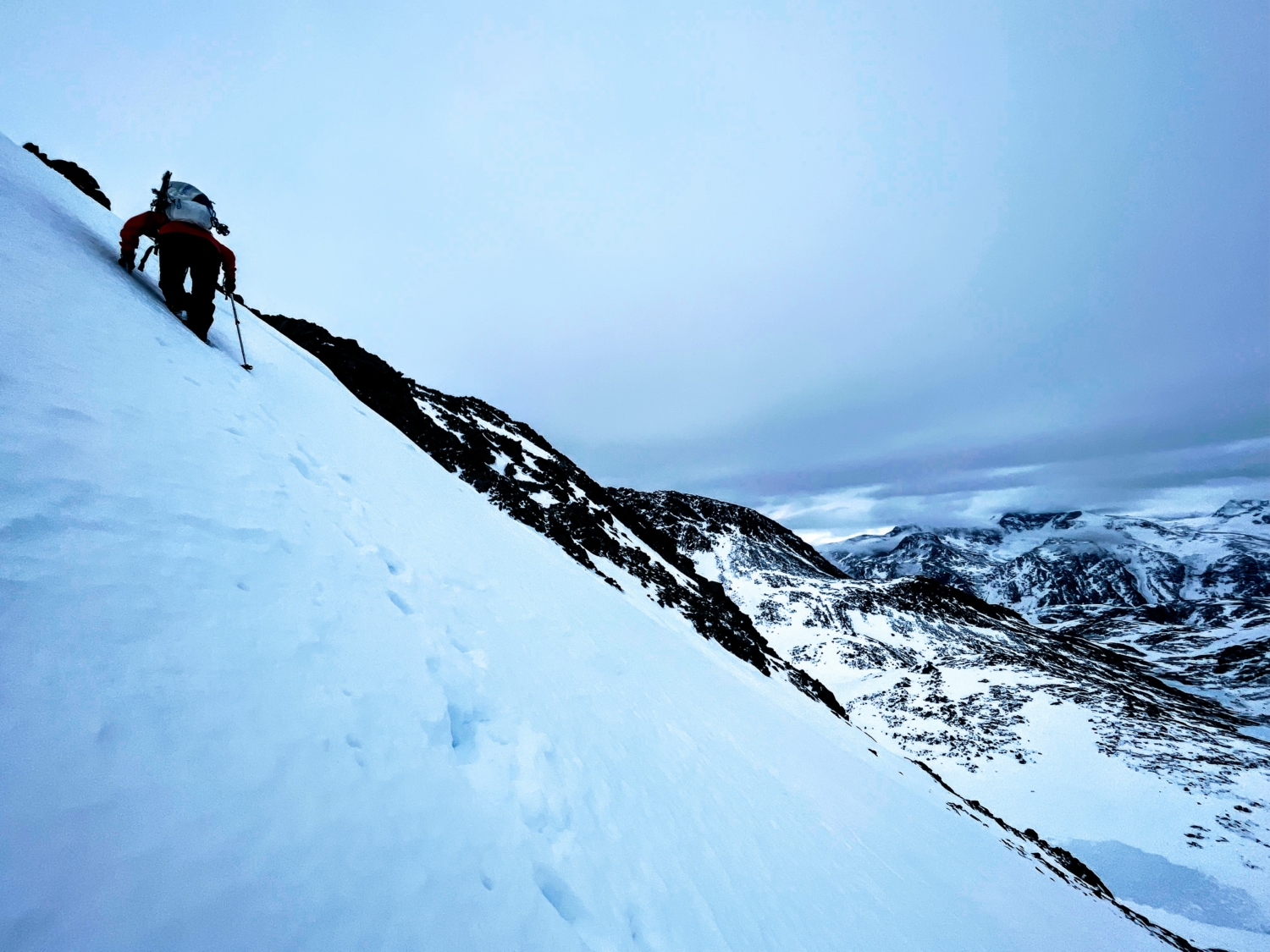 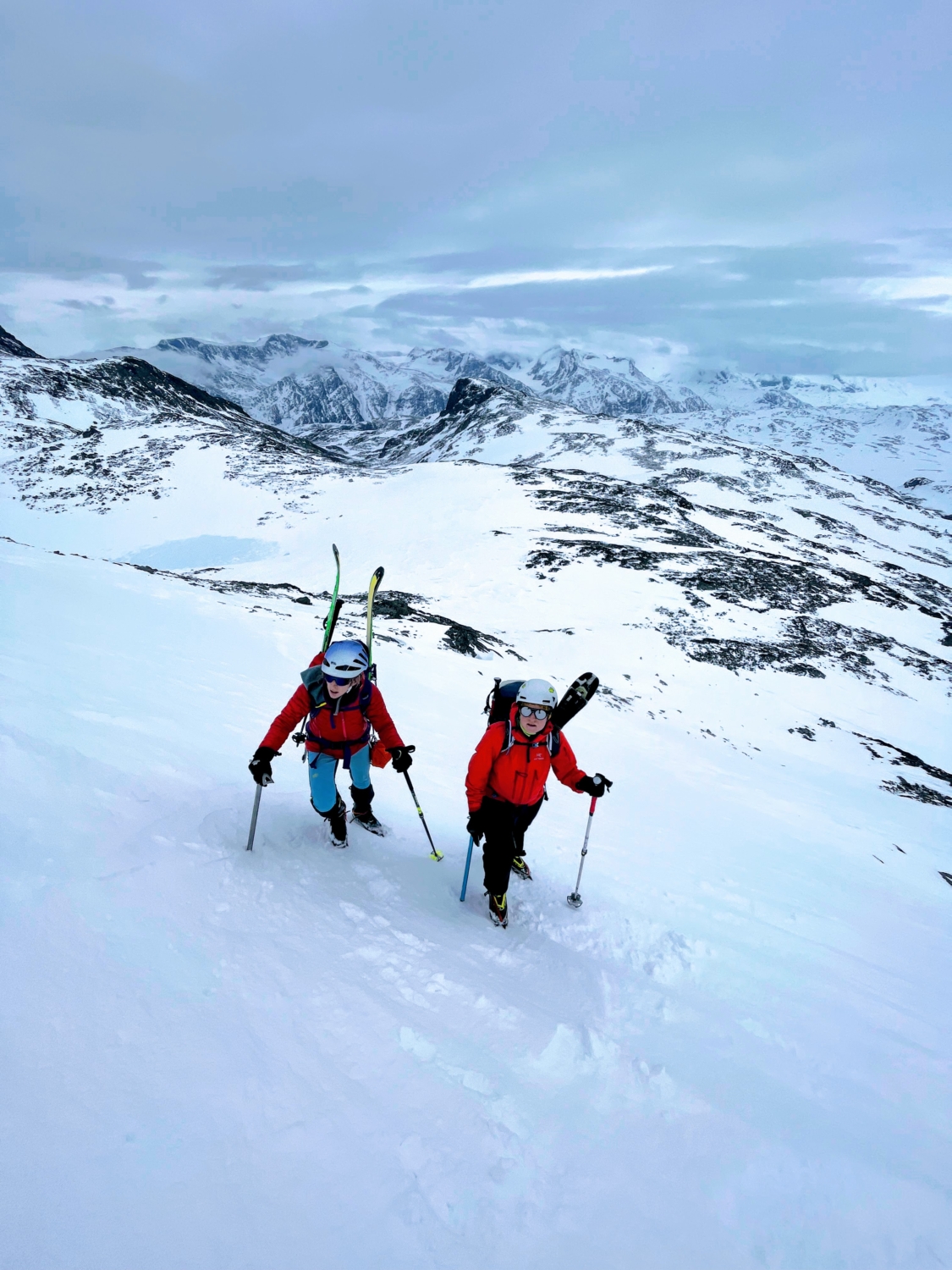 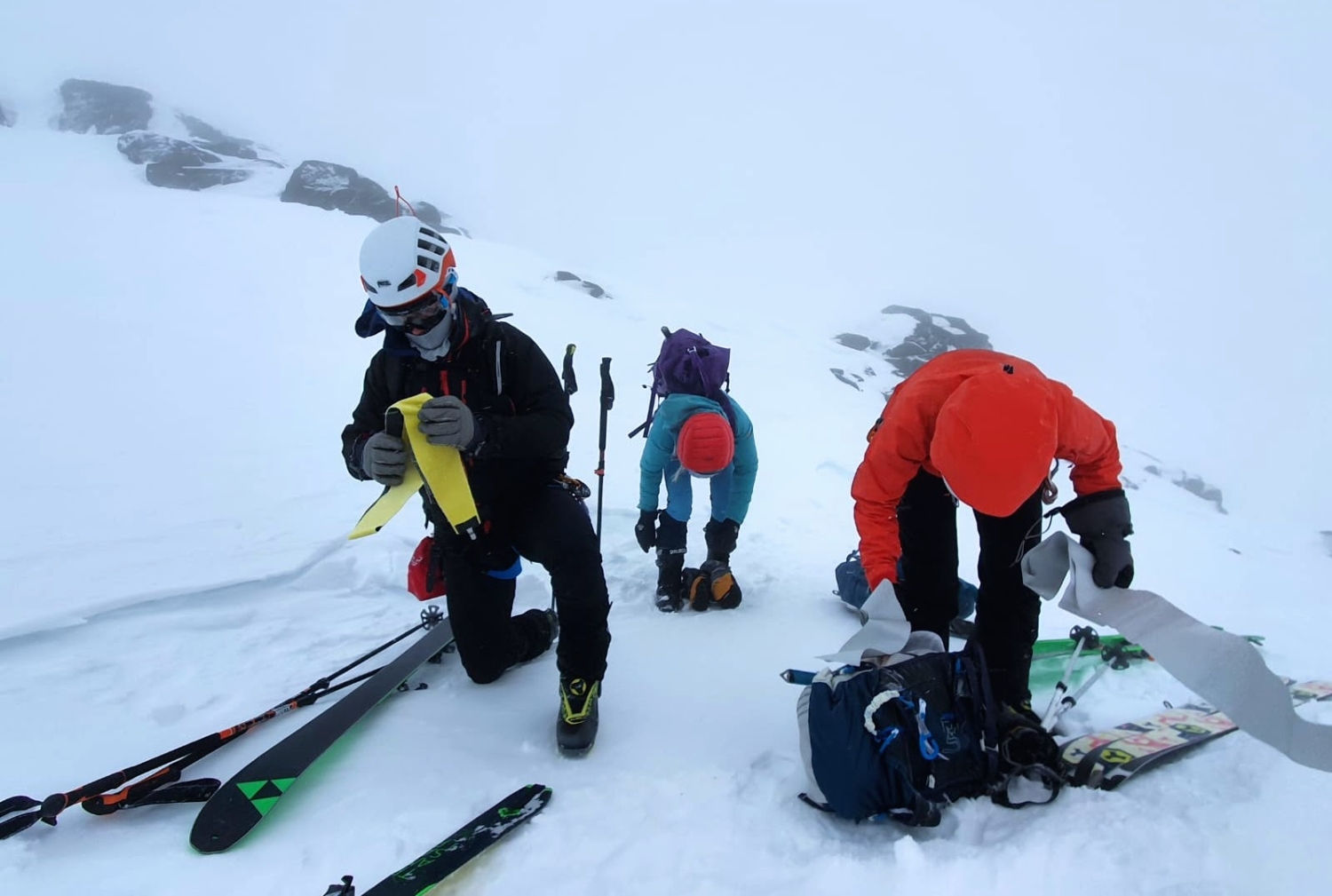 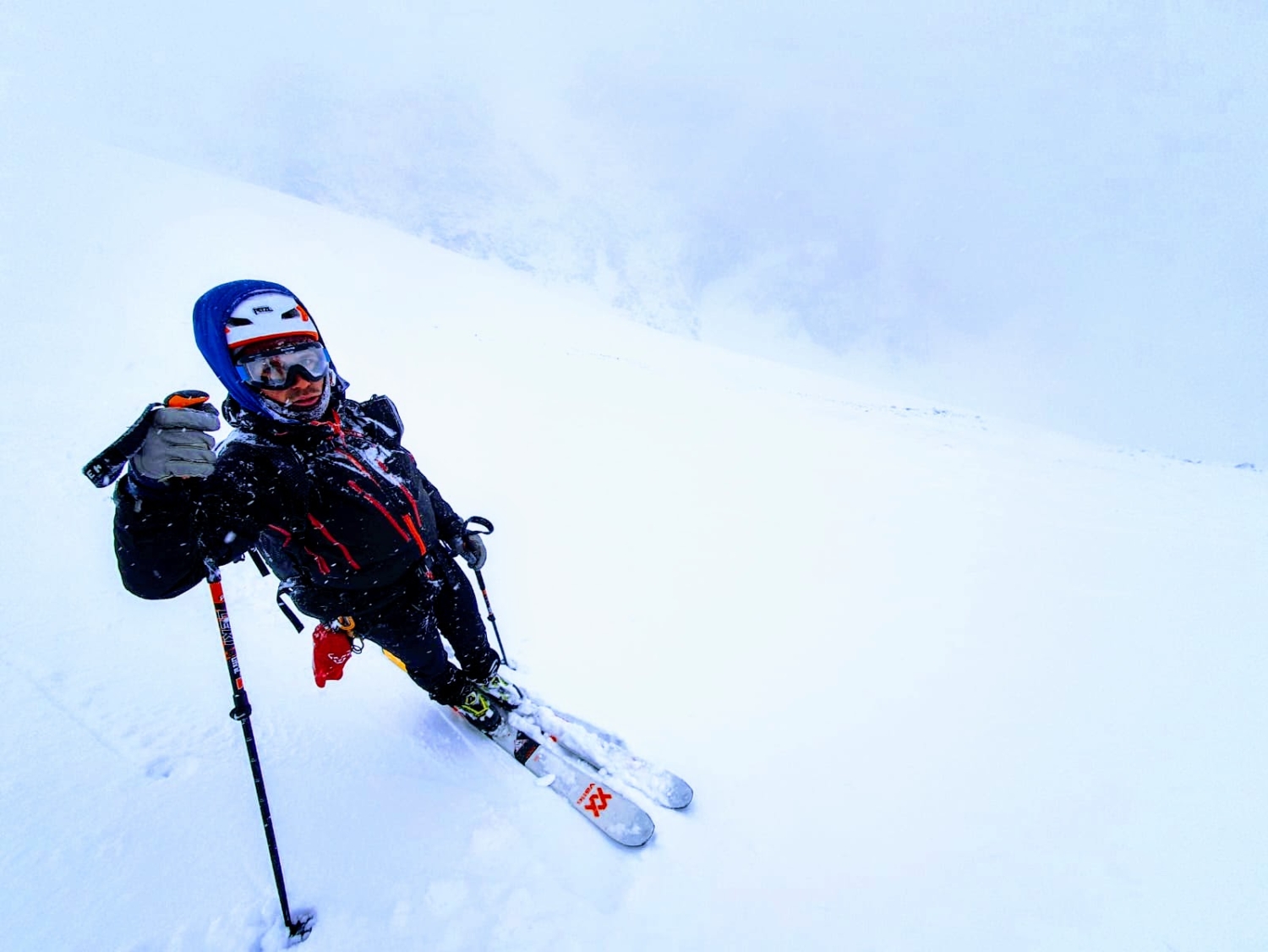 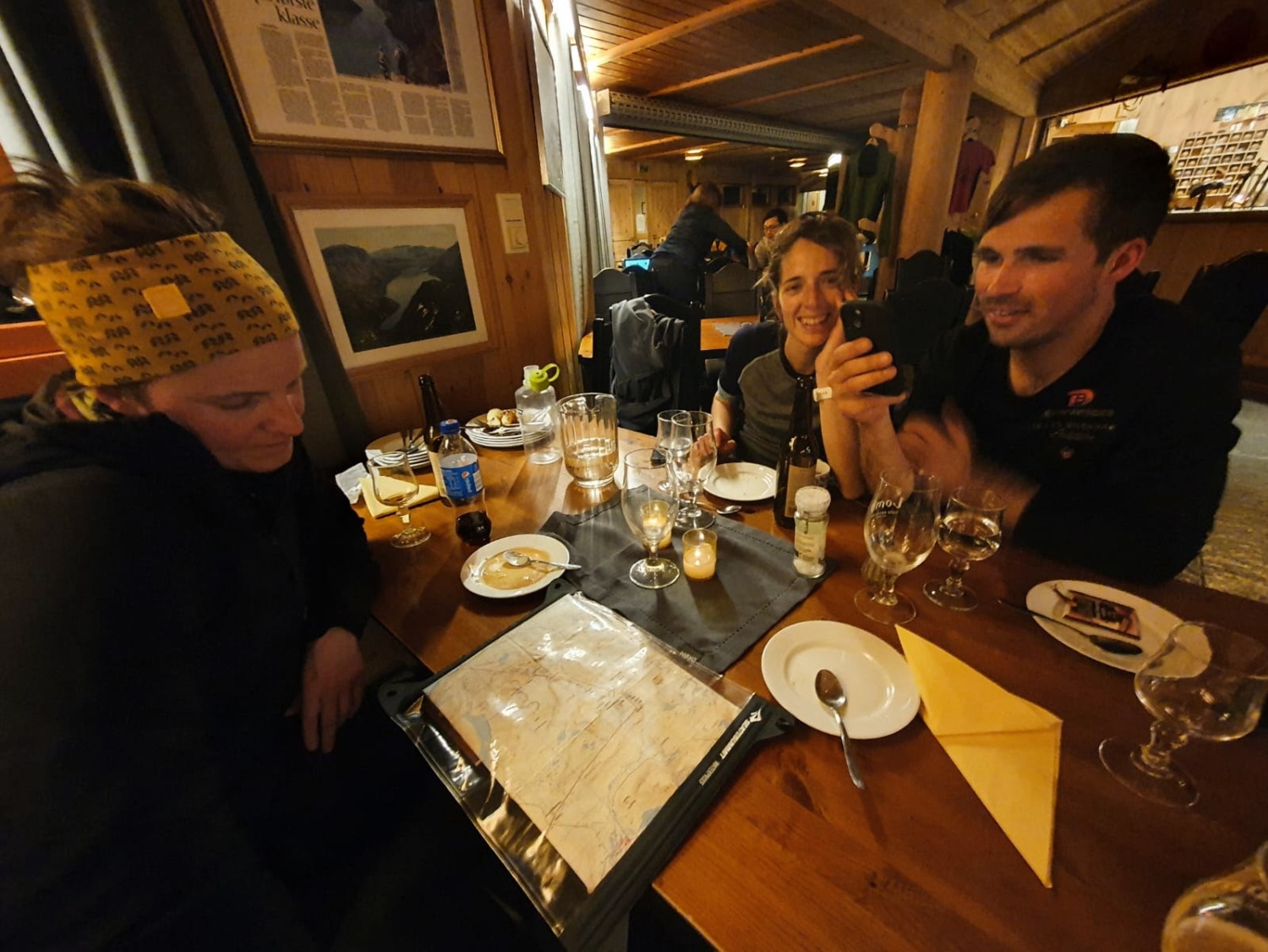 After a second unforeseen night at Memurubu, a bit of rejigging the day’s route was required in order to stay on track. This unfortunately meant that Glittertind would have to be dropped and replaced with a long climb up the Austre Memurubreen glacier. Weather had improved but my feet beaten from the previous day of being locked up were in tatters. The descent off the glacier and gentle skate into the hut were pleasant, as was the cold pint upon arrival. 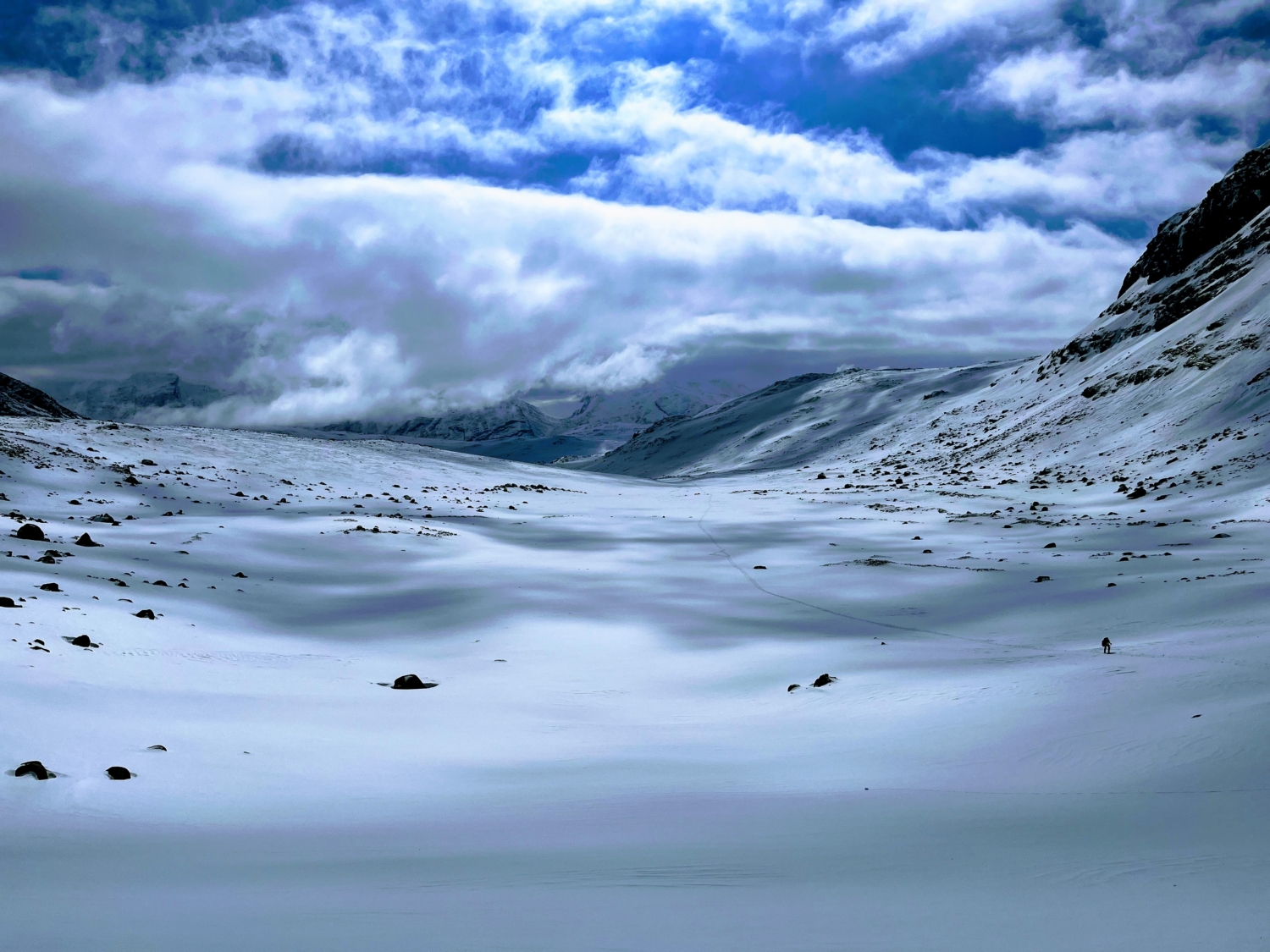 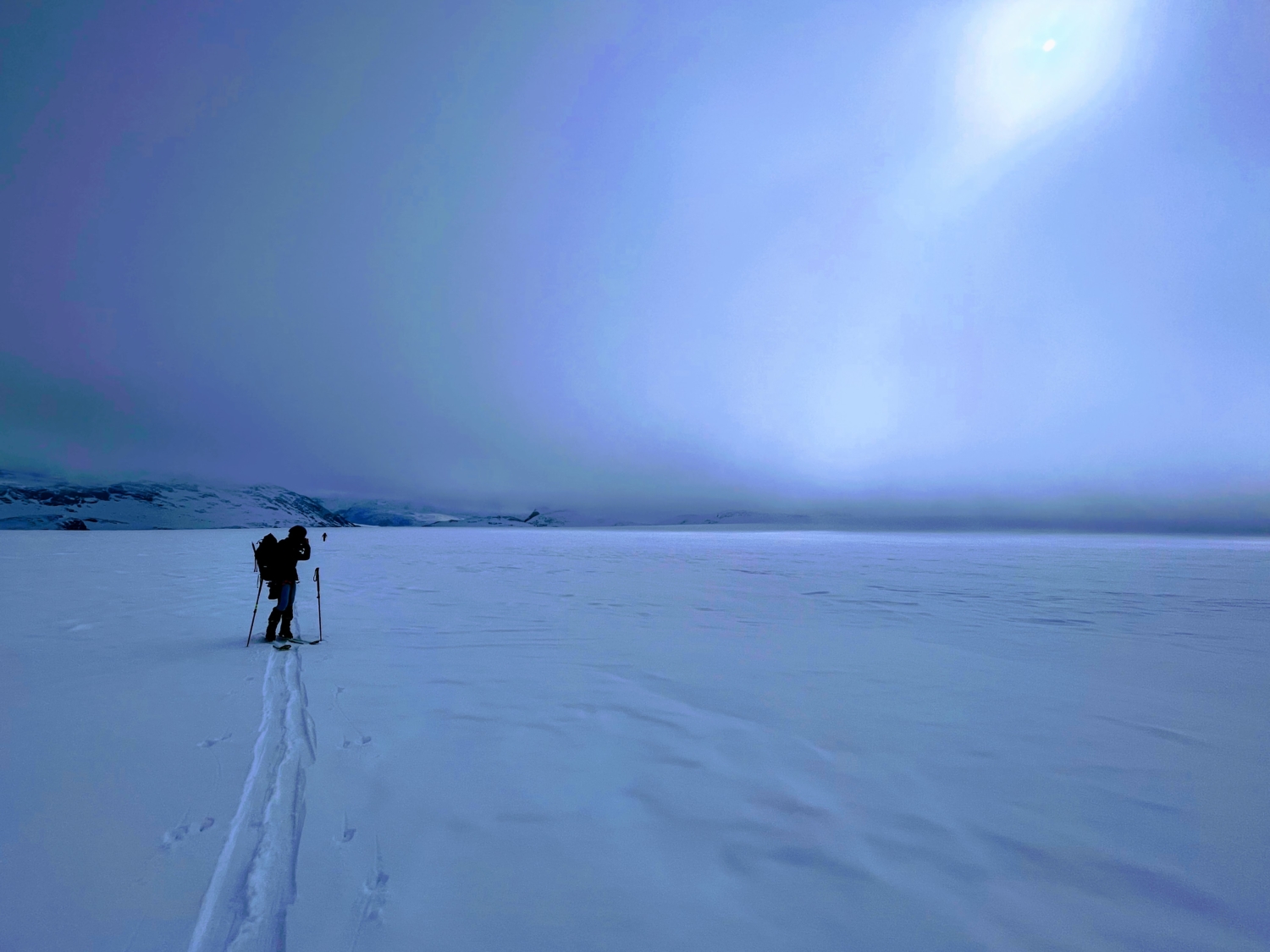 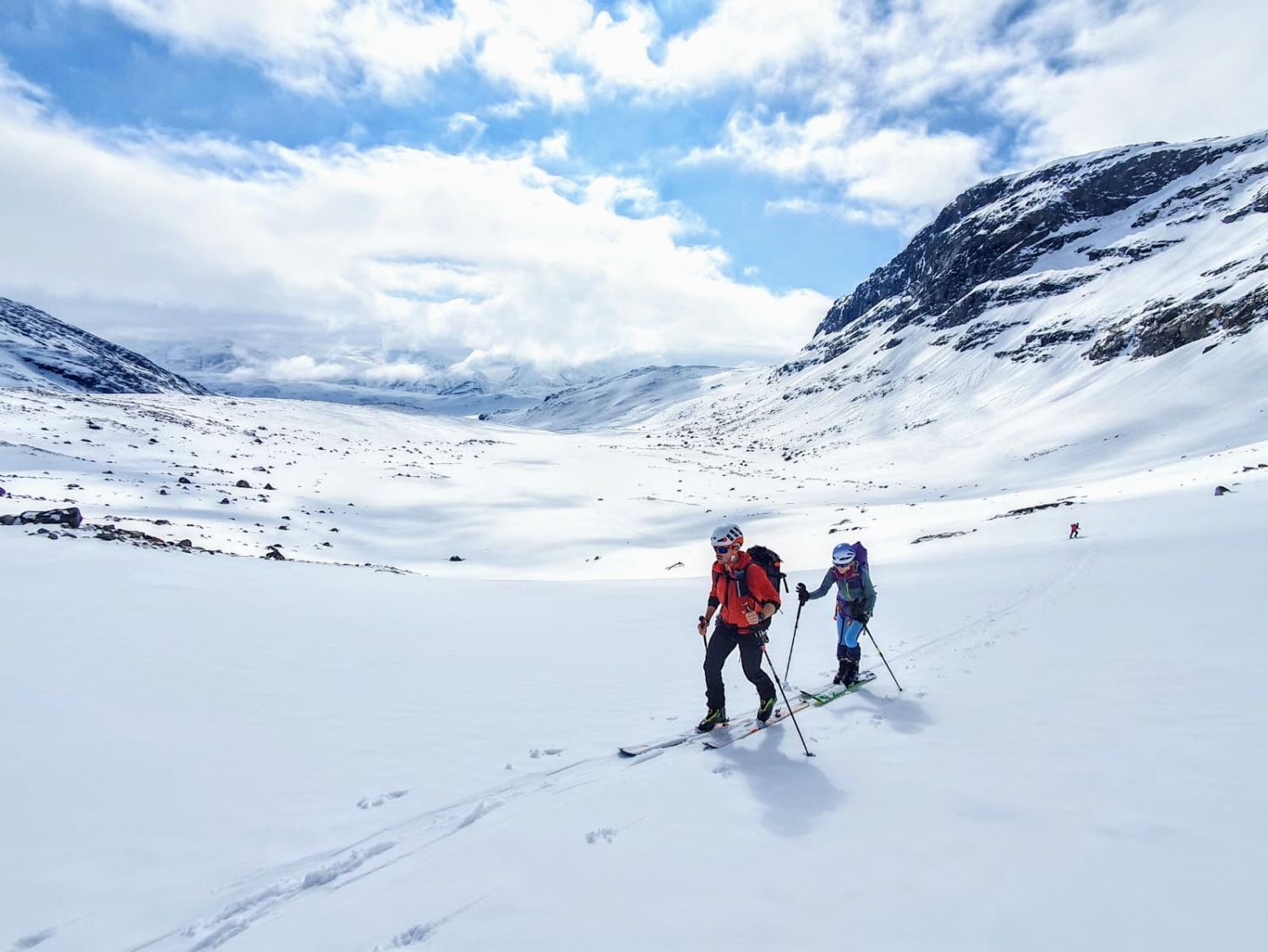 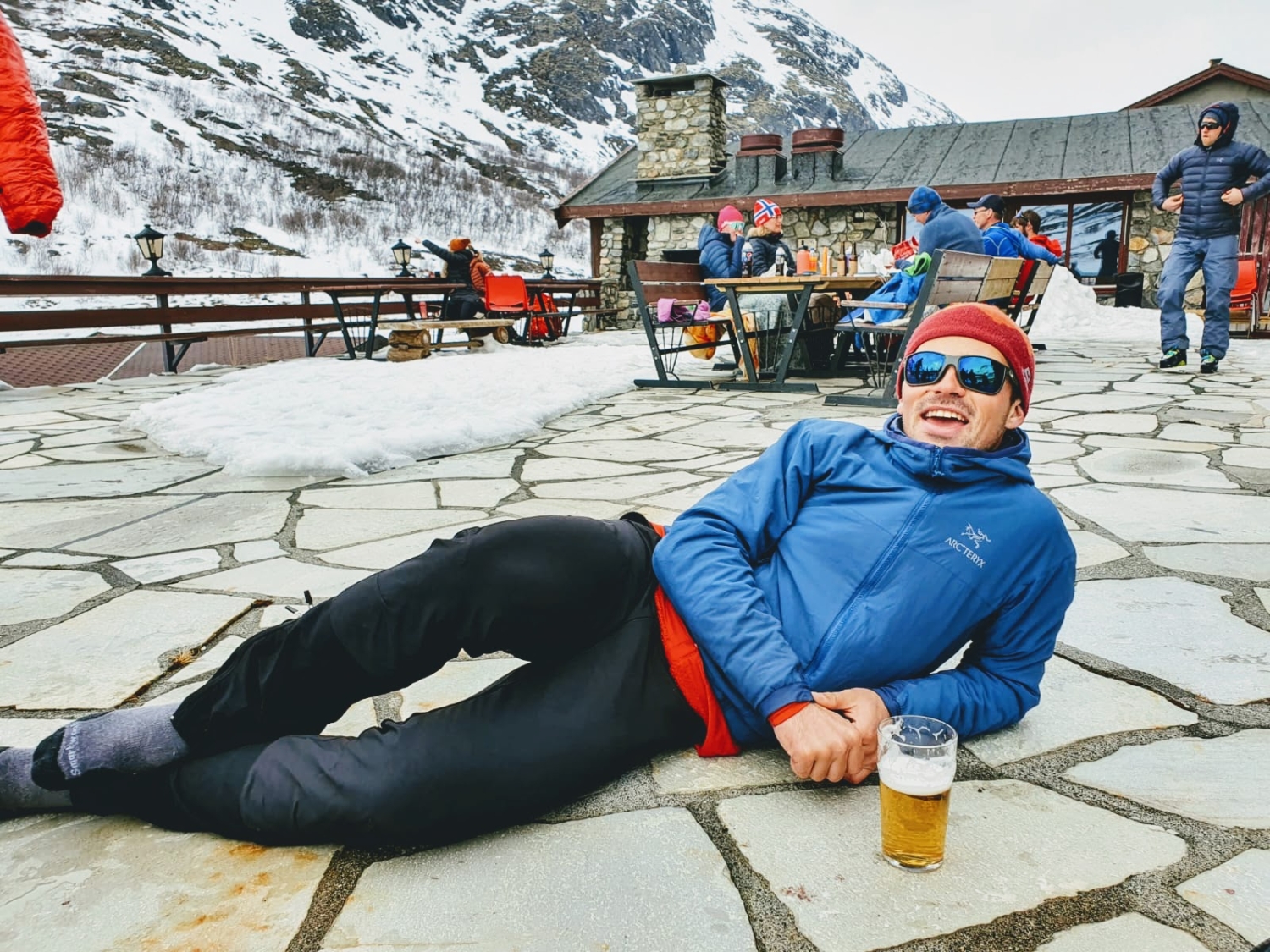 Galdhøpiggen (Norway’s highest) was the objective of most in the hut, but alas, not for us. South face was apparently un-skiable, at least for mere mortals like us, and doing an out and back was a vile proposition in view of the remainder of the day ahead of us. The alternate route instead took us via Tverråbrean glacier, to the summit of Bukkeholstindan and down the Bukkeholsbrean glacier with a 5km false flat skin and skate over the frozen lake to the hut for the night. Pint (or three) well appreciated upon arrival, even if they did cost 15quid a pop. 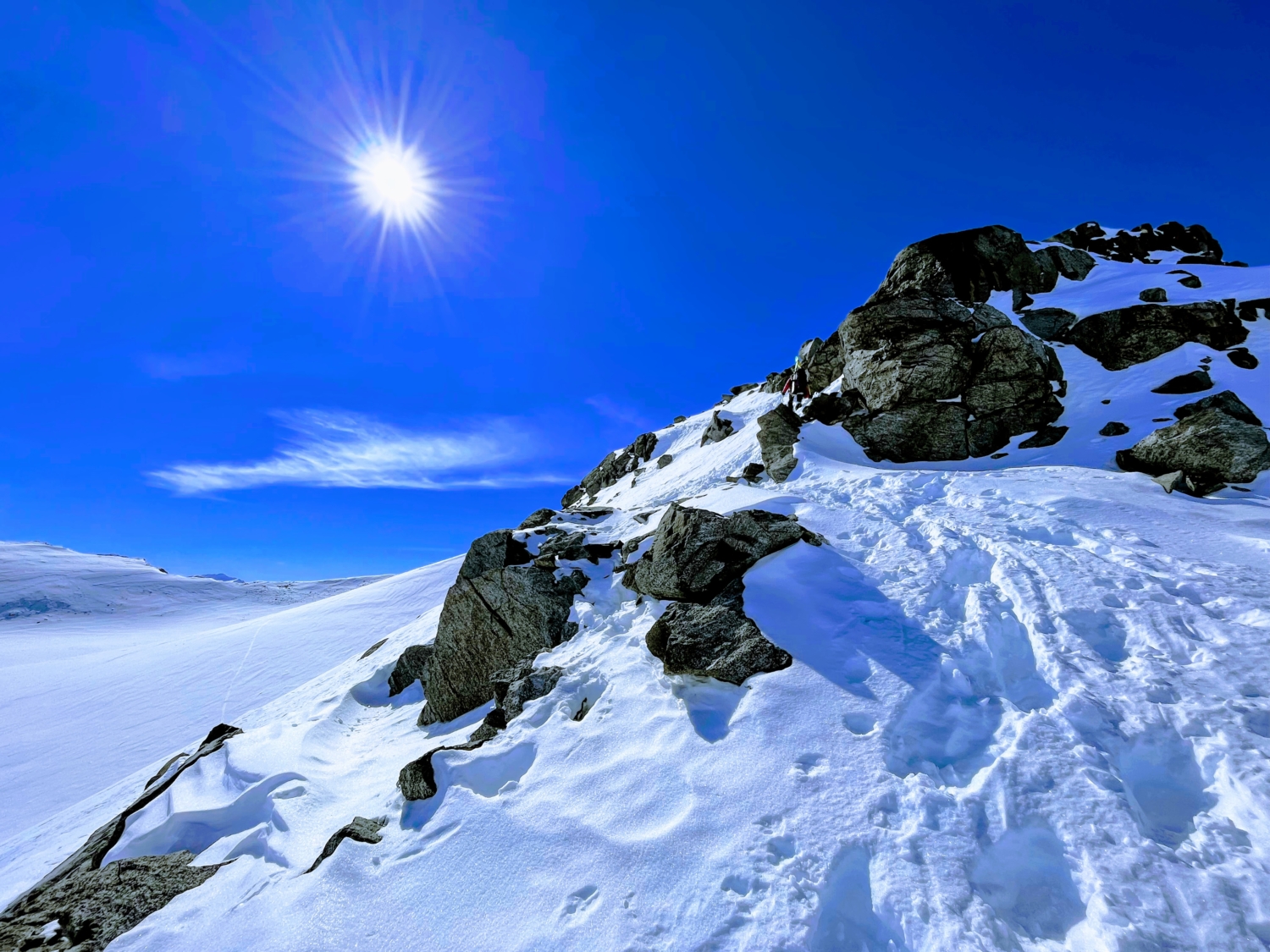 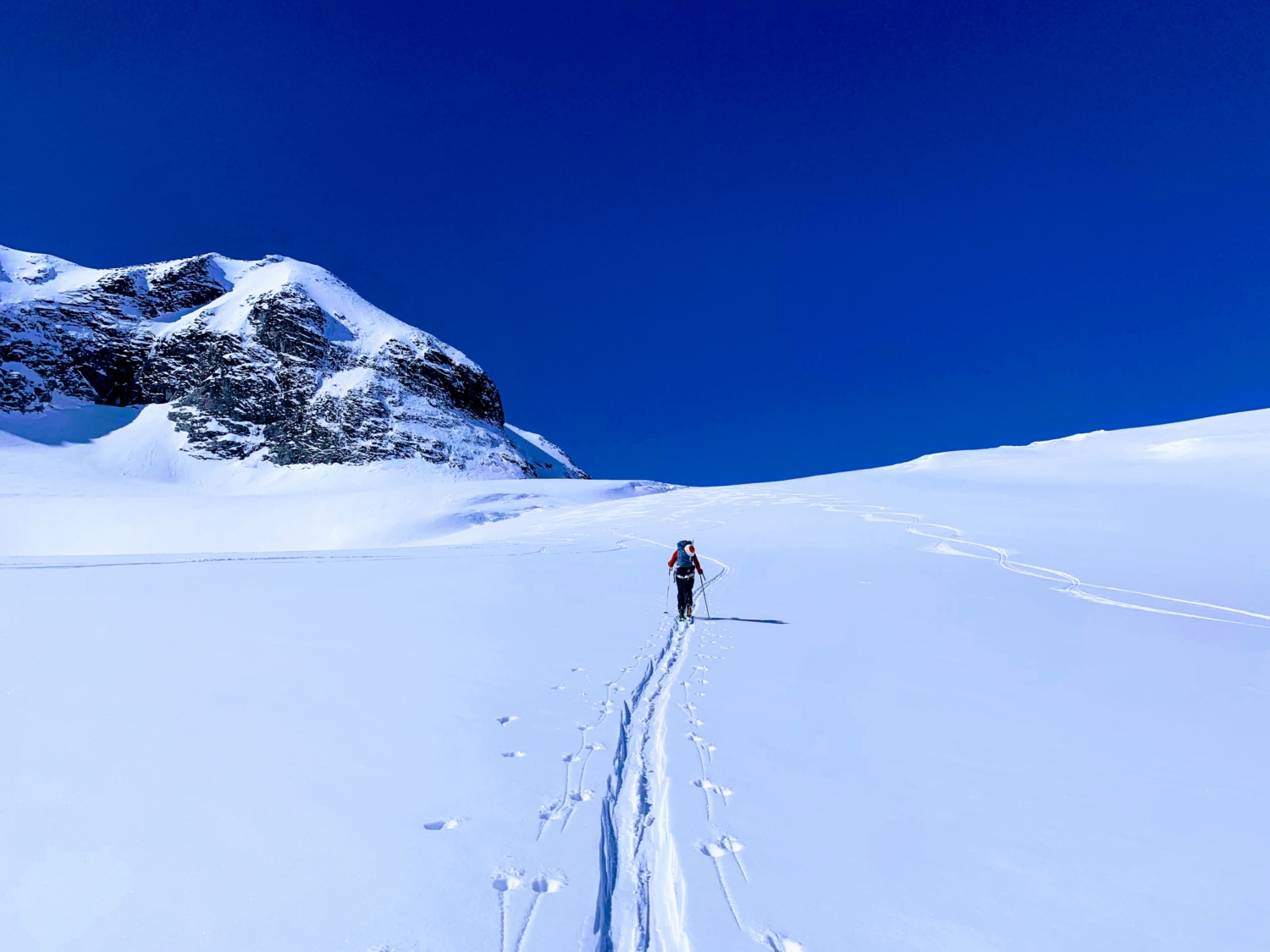 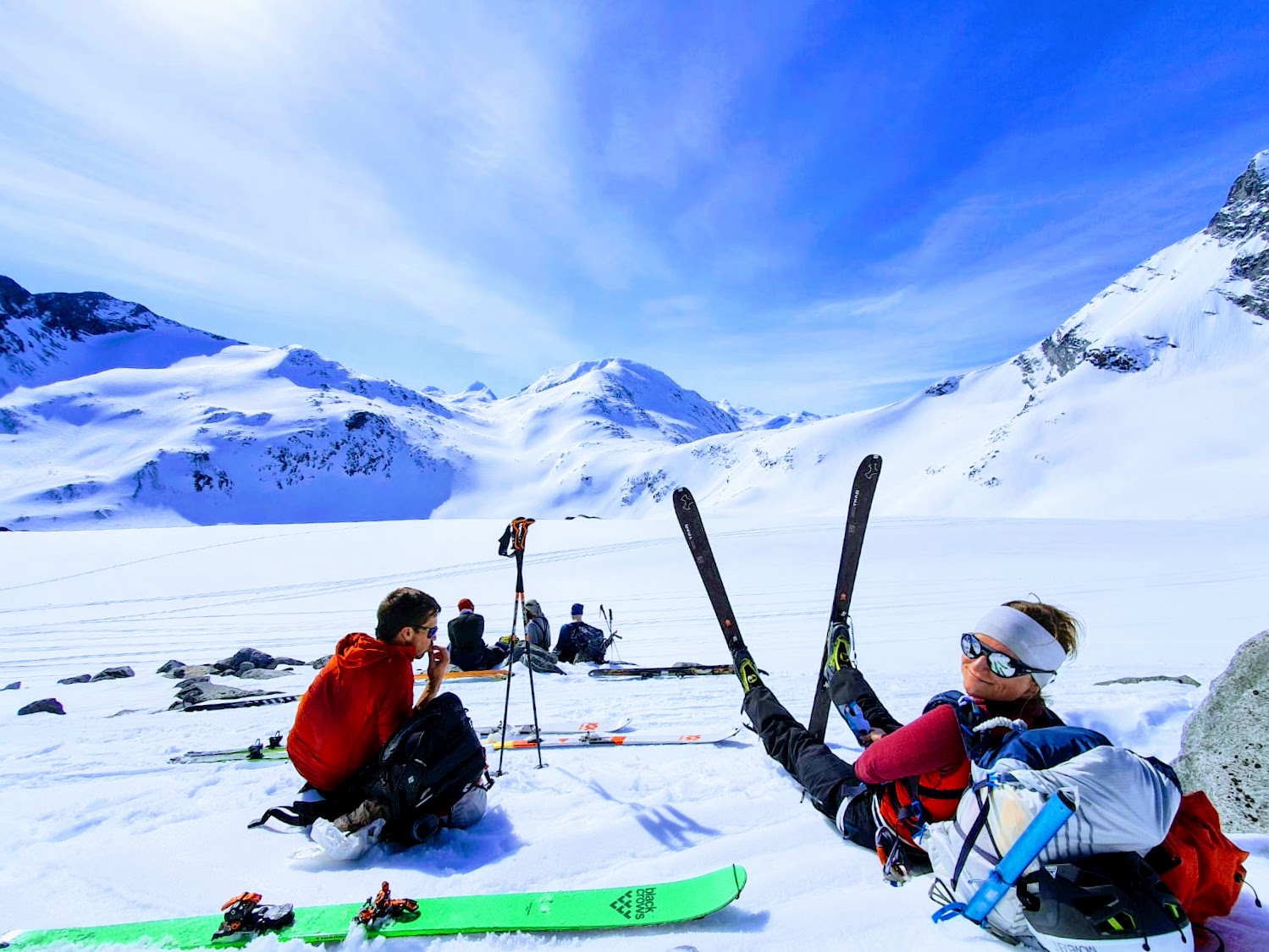 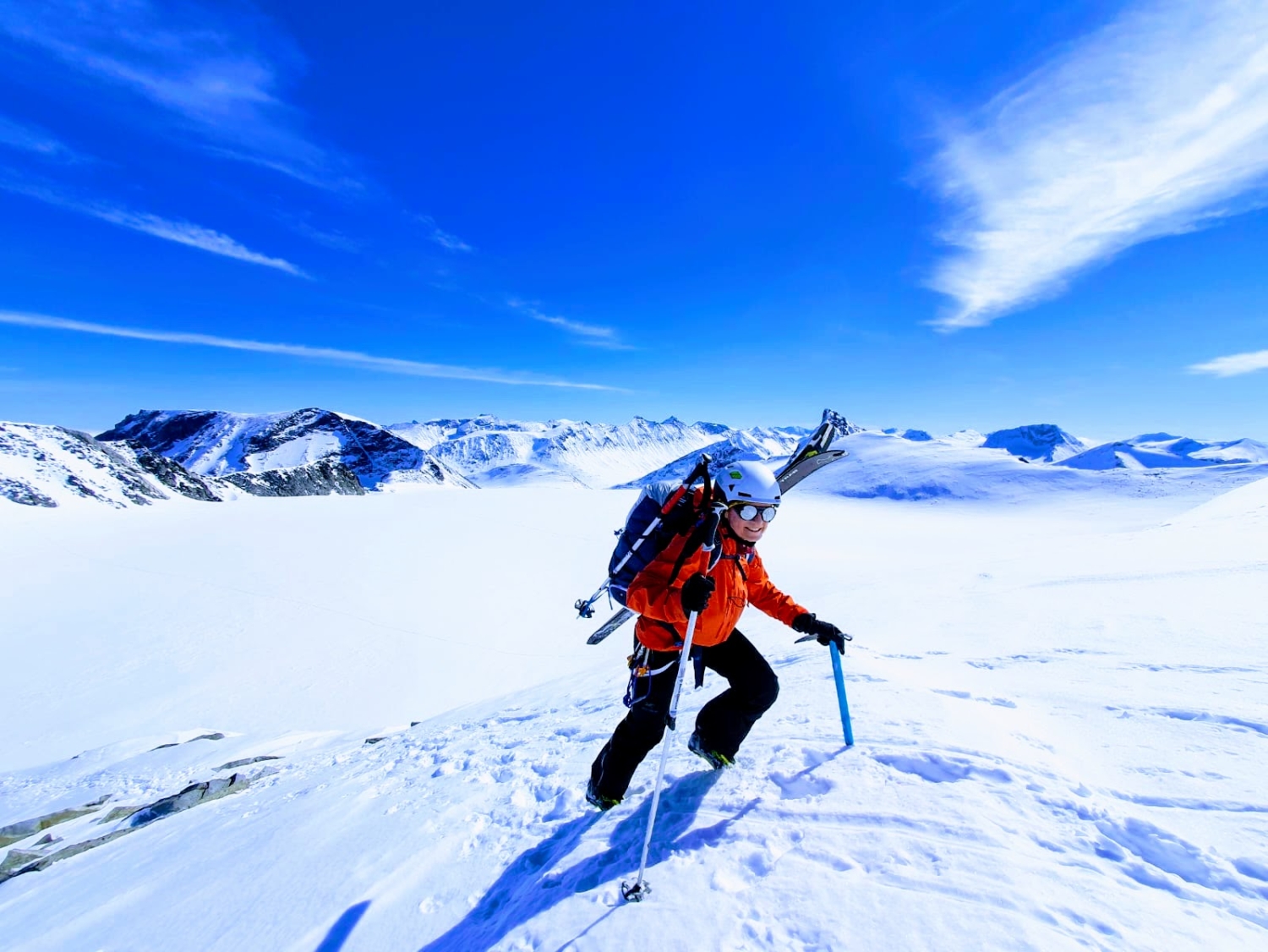 The rest day apparently. A quick circular route around the summit Stetinden and back before lunch. Estimations of timing seemed to be a reoccurring weak point of our group as a 3 or 4 hour day proved much more taxing than planned. The summit required a ski stash at the face and a slight aerial ridge out and back to reach the true summit. Well worth the extra hour (if you didn’t summit what’s the point right?). The few cm of fresh snow from two days ago held really well and the 900m descent off the shoulder were probably the best lines of the trip. 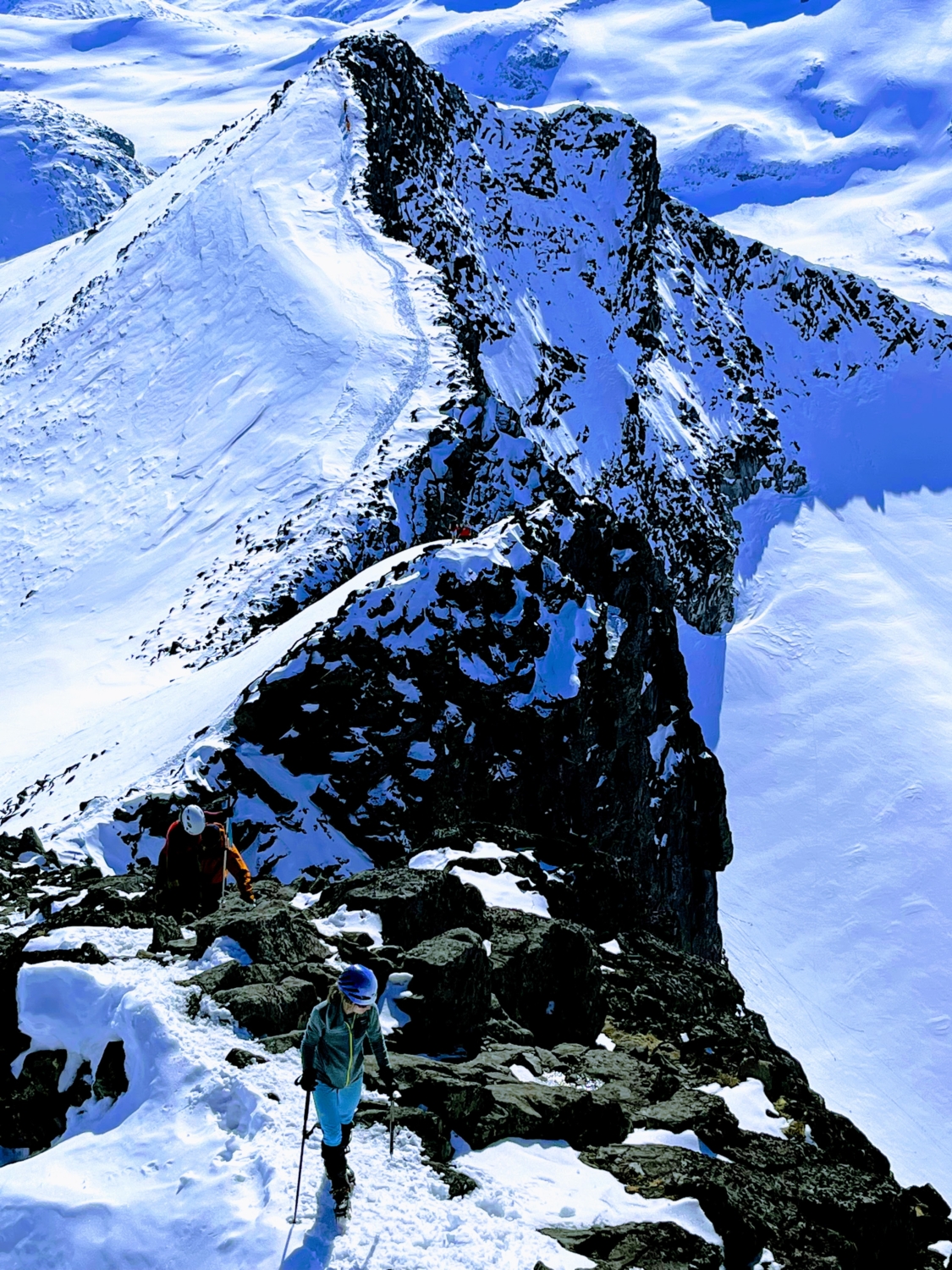 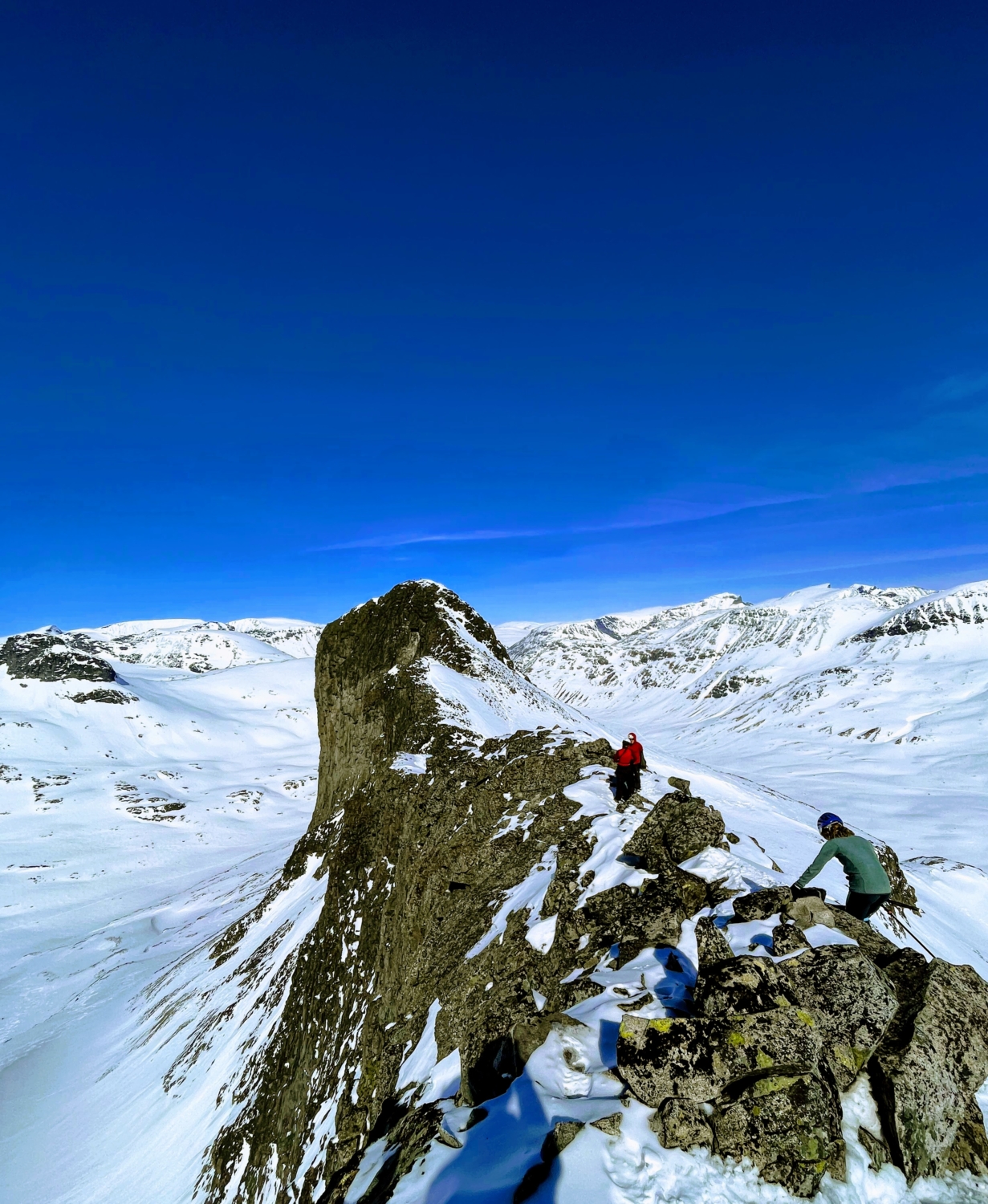 Final day and we were just getting warmed up…

An easterly traverse hitting first the summit of Storebjørn (Big Bear translated I’m rightly informed) and descending its icy exposed face onto the saddle. The last climb up Sokse provided a spicy end to the trip, especially seeing as Leyre left my ice axe at the top of Bukkeholstindan 2 days previous. Fortunately, the ice was hard and previous Scottish winter climbing experience helped as we all negotiated the grade III gully to the top. All that was left was a leisurely 10km ski down to the car at Krossbu, cans of Solo (Norwegian Fanta)  and a 6-hour drive back to Oslo before flying back to Switzerland early the next morning. 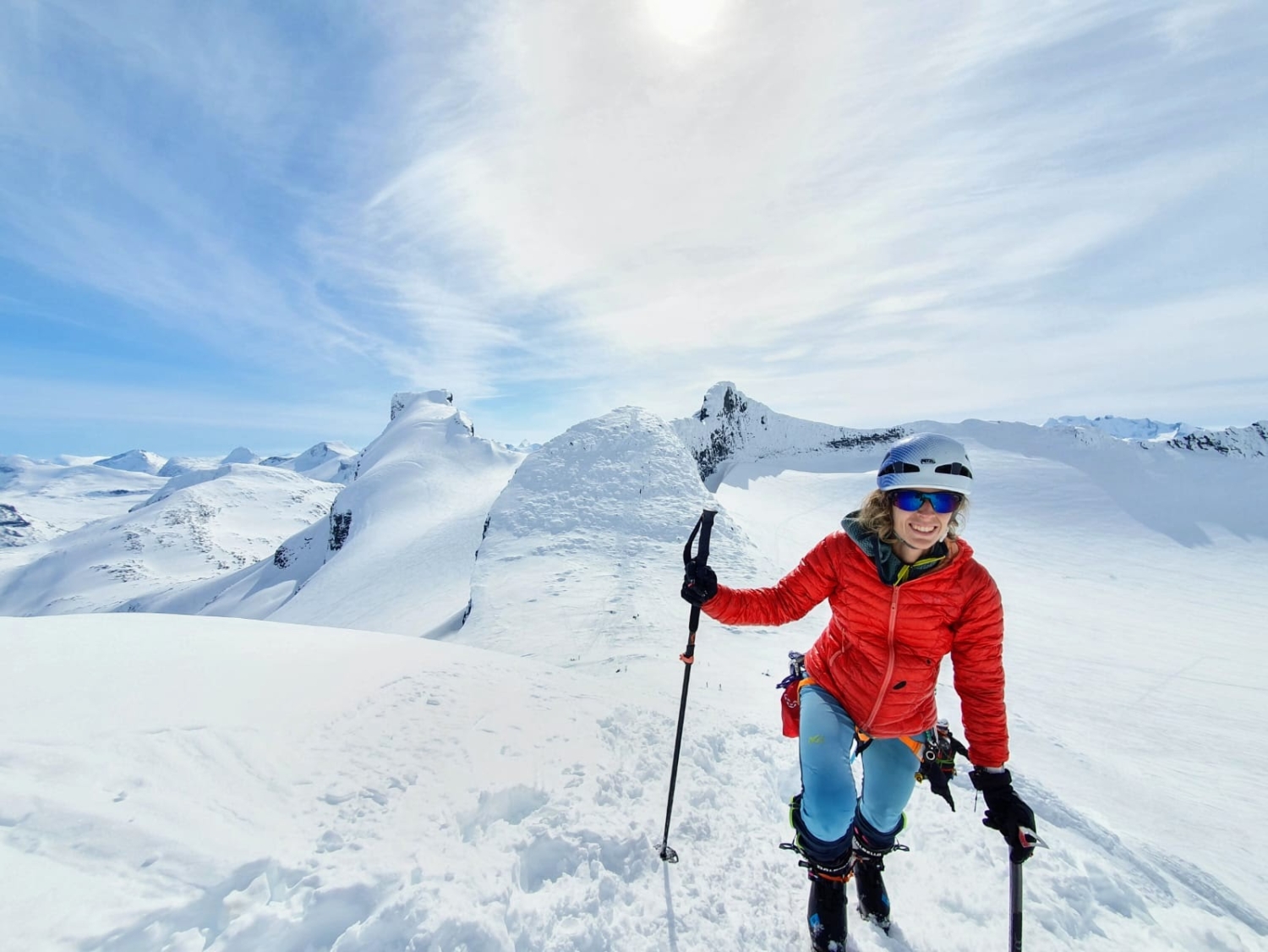 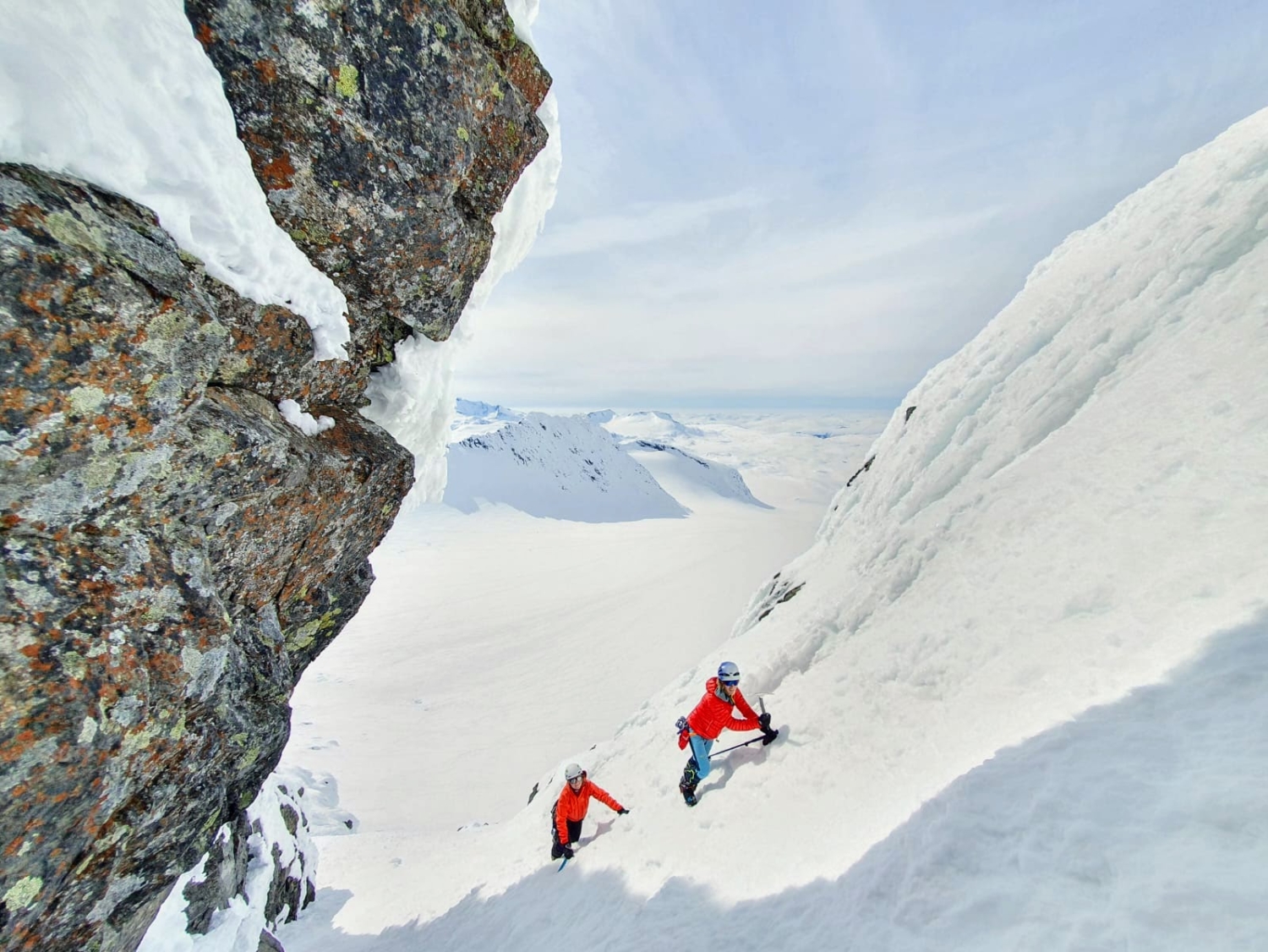 Big thanks to the crew for the week Leyre (for keeping me on my toes the whole week), Tim (guide for the week and general purveyor of good vibes) and of course Vilde and her family for all organisation and hosting us before the trip and fuelling and hydrating us with plenty of brown cheese and delicious wine! You can all be honorary friends of the Westies as decided by me. 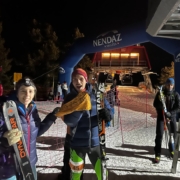