Saturday morning was a glorious occasion. One that will live strong in the memory of all who were present. For it was the day that the blue shorts were unveiled in numbers never before seen. It was a day where the Ochills sparkled in a Yellow and Blue never quite achieved by Shet’s. A grand total of 14 Westies laced up and toed the start line, 6 in stunning new shorts. We had prior warning that the start line had moved to the dyke above the usual field because a bull now called it home. It may have been on the field side but there was a hell of a stampede on the hill side let me tell you.

One part of the Westies Alpine Division was over for his holibobs so we’d picked up Roddy in Partick and he, Kerry and I drove through for the race. After the airline losing his luggage including his race kit it was just as well that I was providing Roddy’s new shorts and managed to scrape together another few bits and pieces.

Back to the race. It was a tight startline and Roddy and I set off with the fast crew, elbows out. It quickly funnelled into a narrow slippy singletrack. It was during this funnelling, whilst Roddy was a half-step in front of me that he slipped. It was comedy in motion. His old Helensburgh mudclaws were clearly a few studs short of a full house and with that the shorts received their first dousing in Scottish mud. There was nothing for it but to shout some abuse, jump over his flailing body and hit the gas. To say I never saw him again would be untrue as we swapped positions in the top 15 or so for the first climb.

Somewhere near the top I managed to get a wee boost and stuck in with a small pack of Pete Mackie, Alan Smith and Graeme Gatherer of Highland Hill Runners. Working well as a group we pushed on well over the top lumpy section before Peter and myself nailing it down to the big stone. Inevitably Alan and Graeme re-caught us on the climb back up. Being an out and back it’s always good to see how you’re going and get a few choice words of encouragement.

Once back up to the top of Kirk Crags Peter made his move, stretching out just enough to make sure he was clear to the finish. Graeme and I passed Alan and had a good fast descent down the slide, sorry, path. A 1km sprint back along the top of the wall and for maybe the first time ever I won a sprint finish by a nose.

Of course all of the above was just an excuse for the fantastic post-race celebrations in the Tillicoultry Centenary Hall. A plethora of pies. A great mix of both scotch and macaroni. There were also flapjacks, cakes of many kinds, biscuits, teas, coffees, orange juice and water. We gathered in the hall with our mud splattered bodies and shared stories our race. We ate pies and drank tea. It was a tremendous afternoon all together. Scottish Hill Racing at its best. 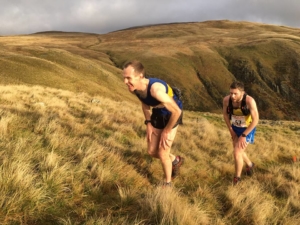 Fourth at the First: Tilli 10k
Scroll to top