The Devil’s Burdens, 2017 It was going to be my first relay race. I hadn’t raced anything that short on hills since I was a teenager; I prefer longer, slower runs, so the speed required had me a bit worried. Waking up way before normal, I made it out of the house in good time to be picked up by Lorna, Christine, and Gordon. They were great company, as all Westies are. Despite the thick fog, we all arrived in good spirits and began searching for our corresponding team members to hash out the logistics of getting race numbers out to everyone. The hall was crammed full of racers. With about 150 teams, it was a bit insane. Before we got the informational talk from the race coordinator, I scared the crap out of Charlotte by asking her if she had a map, compass, etc. She had no clue that there might be kit requirements, and even though we were both only doing leg one, I thought we needed everything. Luckily, Niall assured her that she didn’t need anything. Only those doing the orienteering legs would have kit checks. A few of us headed off to the start of leg one, and already we (or just I) didn’t know where we were going. We followed other runners on the 10 minute jog. I had been worried about my right knee which had been giving me trouble on and off since the Wednesday night club run. Instead, my left leg’s lower, inner calf was tight, which had never happened before, and I was just warming up. I made sure to do some good stretches before we were all called over to line up for the start. I was right behind Charlotte, and when the whistle was blown, I shot off with the crowd. After maybe a quarter mile, I was thinking that the pace was a bit too fast. I checked my watch, and, indeed, we were doing a 6:50 mile. No way was I going to keep that up for long, especially since we were now starting to go uphill, so I allowed myself to slow down. The mud was pretty well packed down, and the forest trails reminded me of many runs back in Colorado. Quickly all but one woman were ahead of me, but I kept another runner in view for the rest of the race. She would walk on the steeper uphills, so we did a back and forth bit for a while. I’m glad I kept her in view, otherwise I might well have missed the checkpoint, even though it was quite clear. It was seemingly all downhill from there, so I just kept trying to run as fast as I could. By the time I made it to the paved cycle path, runners were coming back towards me. They were going fast enough that I was briefly unsure whether they were just running back to the hall or if we had to turn around somewhere and maybe go back to the checkpoint as our finish. I didn’t think that was right (but I really had only taken a cursory look at the map 2 weeks earlier), and my watch said I was just at 4 miles (of a supposed 4.5), so I slowed down for just a bit. Luckily, Niall was heading back and yelled at me to sprint the finish. So, I booked it on the final descent and was done in no time. I had wanted to finish in under 40, and I did it in just over 38. If I had realized the finish was so close, I could have maybe knocked 30 seconds or so off. Note to self: look at the actual map closer to race day. Surprisingly, the knee and my weird calf/ankle pain were no problem during the race. I wish I had seen a bit of the sun, but in retrospect it’s a good thing I couldn’t take in the views. That would have slowed me down. After the run back, I enjoyed some hot soup and tea. Then a bunch of us went to cheer on the finishers. There was a guy cheering on the Carnethy runners who could have held his own against my father-in-law in his Drill Sergeant days. It was interesting watching the different approaches taken to the final set of stairs. Some did them one at a time, some skipped a few, others took the bank to the right or went back and forth between steps and grass. No matter the method, every single runner seemed to be going full steam ahead. There were several close calls, but I saw no wipeouts. And then it was back to the hall to chat and wait for the results. The Westies didn’t win any categories, but I think everyone can be proud of their racing that day. There was so much support, and I could feel the enthusiasm and love of the sport from everyone. I foresee many more races with the Westies in my future. 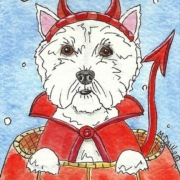 Fost And Frog Ã¢â‚¬â€œ Westies Sexagenarians Bid For Glory! Down down, Camperdown down
Scroll to top