After successfully completing Manor Water the day before (I might have mentioned to the odd Westie I was doing the Man or mouse) , Rob and I piloted my chariot in the direction of Hillend.

It was great to see Plenty of other Westies in Attendance with some of the younger team having done battle at the West district relays and a park run the day before. I hadn’t fully read the pre race instructions so it came as a bit of a shock to find that we climbed halfway up Caerketton hill to the start of the race.

We set off with good visibility up Caerketton and Allermuir  Hills with the field of around 250 tightly bunched. My tactic was to try and keep Jen in my sights for as long as possible. This worked for about the first 6 or 7 miles as we both ran more of the uphill than other runners around us, Jen was quicker on the rocky downhill bits then I would make ground on the wider tracks and bits of road.

The thing about the Skyline is their are just so many climbs, most of them aren’t overly long but the impact of climb after climb takes it out of you. The section from Turnhouse to the drove road is a case in point as the tracks are good but it’s still a slog up and down Carnethy, Scald Law and the Kips. Scald Law was where I lost sight of Jen as she put in a big effort by running when most people where walking.

I reached the Drove road in 2 hours well inside the cut off and took on board water and fuel. There then followed a mile or so off fastish running on a good track to get up Hare Hill. The course then became more challenging as the ground became boggy towards Black Hill and then quite heathery and tussocky at Bell’s Hill. By now the front of the tops of my legs (quadriceps), felt trashed and it was quite painful running downhill. I was exchanging places by now with 3 or 4 people who I was beating up the hills only to have them pass me as I struggled down the other side.

At about the 13 mile mark my energy took a real dip and as I searched in my bag for wine gums and chocolate slogging up yet another hill JD breezed past me offering motivational words “it’s only another hour, are you a man or mouse, think how good that beer will taste tonight”. It did the trick and I managed to stay close to John for the next couple of miles until he took a better line than me coming off Allermuir Hill. I dug in as I really wanted to get under 4 hours but unfortunately an attack of cramp in the last half mile saw me cross the finish line in 4 hours and 20 odd seconds.

What about the rest of the Westies. Well Rob had a storming run coming home in 2:48. Ally piped Tom near the end with both of them sub 3:20. Arron ran a very impressive 3:30 and Emma and Jen had storming races (3:42 and 3:43). JD running his 22nd Skyline finished in 3:57 and Andrew got round in 4:22 which is quite an achievement given he had also ran at Manor Water.

Thanks to Tom F, Kerry and Katie for support and encouragement at the finish and on the course. 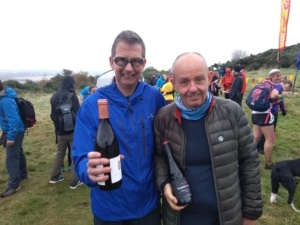 All that remained was for Rob to win a spot prize which consisted of 3 bottles of wine and an expensive looking bottle of Whiskey and for Andrew to assertively insist that the officials reward us with wine for our Man or Mouse adventure.