Whilst having a look at the Munro map a few months ago, out of curiosity I had a look for the furthest North, East, South and West Munros. I’m familiar, as most Glasgow-based hill folk, with Ben Lomond and I knew that Ben Hope was the most Northerly, although I’d never been up it, but had to check the others. Mount Keen was another I hadn’t climbed. Like a lot of folk I suspected Ben More might be the most Westerly but no, it was clearly one of the Cuillin: Sgurr na Banachdich. It’s right in the middle of the ridge, very accessible from Glen Brittle. I hadn’t climbed it either. So the obvious thing was to link them together.

Has this been done before? Quick google search… Stephen Senn has a nice wee description of his experiences on each hill and seems to have coined the collective name for the group ‘The Cardinal Munros’. Apart from that there are a couple of folk who’ve cycled and walked them over a number of weeks or as part of a larger challenge. But I was thinking quicker, using a car, like in a day maybe? No one’s mentioned that.

Spreadsheet time. Work out all driving combinations. Best route is W-N-E-S or it’s reverse. None of these hills are technical and the ‘normal’ tourist path routes seem to be the quickest. Mt Keen is interesting as Kerry has previously ran it as a point-to-point from Glen Tanar to Glen Esk and proposed that, with a driver taking the vehicle round to the finish point. Extra run distance offset by less driving time on the critical path. We decided that for simplicity and taking out the requirement for a driver, the Glen Esk start and finish worked out best. All in, without faff factor, a best guess of times said a round could be completed in 21:50. This included climb and descent of each hill, so starting and stopping the clock at the car parks, not just the summits. Enough info for a potential 24hr challenge.

A crew of Westies have been doing some pre-work morning Munros of late and I asked around to see if anyone fancied it. Chris and Tom were keen, we could fit 3 in a car fairly comfortably and rotate the driving to give enough rest. We settled on Easter weekend and left Glasgow at 2pm on the Friday to drive north to the start on Skye. 3 hrs to get from Glasgow to Tyndrum was a personal record but the rest of the way was fine. Tom had baked a bacon and egg pie which was exquisite. Supply stop in Morrisons Fort William where I’ve never seen Tom move so fast as when he saw some chocolate hot cross buns. In the trolley they went to join a plentiful selection of grub. Stop for tea in Kyle where, upon seeing the menu, there was only really one choice: The Blaggis Burger. It wasn’t great but with a name like that who cares? Full of blaggis we tootled across to Glen Brittle. As we drove into the glen in the twilight we could see a super bright headtorch high up on the ridge. Quickly we realised this was a rescue helicopter and there was clearly an incident unfolding in the dark at the top of the Cuillin. Car quiet, what are we doing? Should we be going up here in the middle of the night? Hmm. Park up at Glen Brittle YH and sort our bags out. At 10pm we settle for the last stationary rest for a while but a few butterflies and an uncomfortable seat don’t equal sleep. Alarm at 11:45. Snooze until 11:55. Change and hill shoes on.

Bang on Midnight we touch the car and trot along. Path is good up a burn with the faint outline of the mighty Cuillin ahead. The full moon is hiding behind clouds but a fair wind means it makes a couple of guest appearances where we turn off headtorches and enjoy moving at one with the hill. Moving solidly, but in the dark we miss the right hand trod at 150m and decide to stick to the burn which is less direct but a decent path. Then pick a rough route over the Coir’ an Eich scree. Soon we top out onto the western approach ridge, decent dark drop to our left. Small cairn at the summit seems to be it. Cannae see much but a double check of alt on our watches looks good. Tom produces his hip flask, be rude not to. No hanging about in the wind. Gingerly trot back down sharp scree with bearings taken for first section to make sure we end up in the right corrie. Solid down to touch car in 2hrs 2mins. 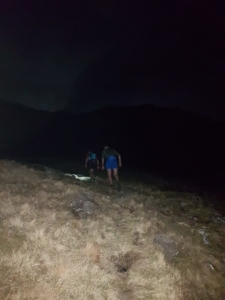 The drive to Ben Hope in the dark is exhausting. One thing we didn’t factor into the spreadsheet was the deer and their decision to have a full moon party on the roads. After several close encounters we are glad of the first morning light and a coffee stop at Skiach fuel station. Now 68, the Shrek soundtrack and Bonar Bridge keep spirits high as we troop north enjoying some rough single track and fiery red skies. 30 mins down on schedule but not bad all considered.

A quick turnaround from the car at Ben Hope and we’re off. Solid run, legs still feeling generally strong. 1hr to summit but top 300m or so in wet windy cloud. Another swig at the trig and we’re away again, thinking good opportunity to make back some time. 30mins down. 15 mins clawed back on schedule. 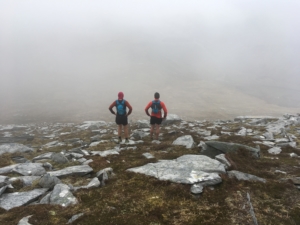 The drive from Ben Hope to Mt Keen is the longest section of the route (5 ½ hours). But it includes both Bonar and Cock bridges. It becomes clear that the car now smells. Blaggis rearing his ugly head? But we truck on. 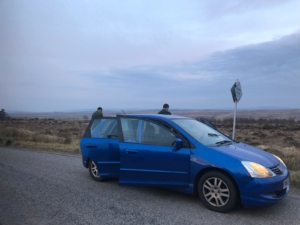 Again we touch the car and start the watches. In a fantastic show of support Sam and Ali B have come along to join us for this leg but inform us during our pre-run faff that they will crack on and let us catch them up the glen. The smell? What a day. Scorching hot, sun blaring. It’s a sweaty run along the flat Glen Esk. We meet the lads at the queen’s well before we hit the stalkers path that winds up eventually to the summit. Sam and Alistair are on good form chatting away, we are moving fine. We realised Sam wasn’t the only slippery character on the hill when we stumbled upon a nice little adder basking on the rocky path. Good views at top, another swig then a solid descent. Back to the car in 2hrs 19mins. Again pulling back on the schedule. 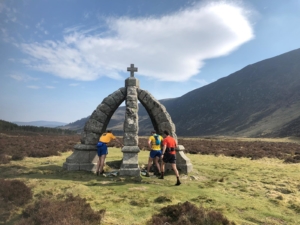 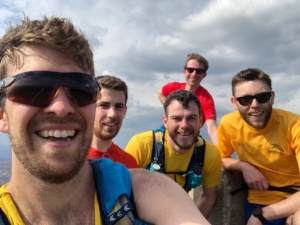 The final drive to Rowardennan is the shortest but we’re pretty done in now. Heat compounding our tired bodies and sleep deprivation. Robbie Williams, Fat Boy Slim and a Dundee ice cream get us there for 19:50 – bang on the schedule!

We’ve heard that Kerry, Katie and Jenn & Tom have come out to meet us and support the final climb. This is a great morale boost. But when we arrive at the car park we get a text saying they’ve just headed off so we can do it at our pace. Have Sam and Ali pre-warned about the smell? We get literally passed the toilet block and Tom realises he’s forgotten his headtorch, so have I. No chance are we retracing 50m to the car, worry about that on the way down. Again we climb steadily but we know we’re knackered. It’s a warm evening and we’re running on fumes. Eventually about ¾ of the way up we spot them ahead and know it’s a good time to stretch out the strides and push on. Summit at 21:18. Last of the daylight disappears as we prop ourselves against the trig and enjoy the sweet warm Tennants can we’ve each lugged up. Now, just to get down. I’m certainly spent. It’s a long walk. Sharing headtorches makes the rough path a challenge so there’s no running involved. At the bottom I’m fully bonked. Maybe a bad jelly baby, maybe a can of lager on a dangerously unfed stomach, but I prefer to think it’s the blaggis having its last laugh. We touch the car at 22:31. Job done and challenge completed! First known round of all 4 cardinal Munros in 24hrs. The original plan was to try get a pint in the Rowardennan Hotel before close. This isn’t even discussed. We’re as good as dead. 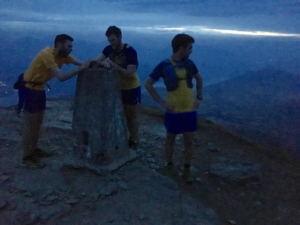 Could the time be improved? Undoubtedly, but I suspect not by us! We got pretty lucky with the weather, lucky-ish with the full moon, lucky with the blaggis, lucky with no mechanical issues and most of all lucky with the support. We were unlucky with the Easter weekend traffic (although never really at standstill once the clock started) and unlucky with the cloud and wind on Sgurr na B and Ben H. It would be definitely be better to head up early on the day before and get a proper sleep before starting. You could start at 11pm and then be up and down Ben Lomond in the light or of course do it further into the summer when deer are also grazing higher. But we think better for purity to keep it within one proper day. Biggest time saver would be a faster car. The old civic never faltered though. Driving was steady but we never pushed on particularly hard, weary of hot engine, wheel bearings, rough roads, tourists and wildlife. We hung about on Ben Lomond with pals and a beer which wouldn’t appeal to more racing orientated losers.

If anyone fancies giving it a bash it’s a toughy but what a great adventure, highly recommended. On a personal note it was a joy to tackle it with Chris and Tom and we were never in doubt that it would be anything other than a good laugh, which is exactly how it turned out!

Went for a wee jaunt on Easter. Don’t know if anyone’ll be interested,...