That Manny Gorman and Gordon McCaffrey scored wins for Westerlands in the M50 and M60 categories in Saturday’s second SHR championship counter (12.8k/762 m) was not the great shock of the day. The main surprise, divulged during a journey where the conversation meandered like the zig-zagging B-road, was that Gordon is the biggest Sandra Bullock fan north of the Tweed.

While You Were Sleeping we had set off for the border. 140 runners and 13 Westies pitched up at Halterburn, near Kirk Yetholm, the cosiest of hamlets. It’s gorgeous. We arrived in good time and didn’t Miss any Congeniality. The pre-race briefing was wonderfully vague: “run over a few tops – there are plenty of them – turn left at that big cloud *points* then head back”. Righto.

Brian Marshall has won this race a hatful of times, and if ever there was a race to run barefoot, it’s this. A lush, emerald, surging landscape with only a scattering of gorse bushes to blight your path. Some overnight rain and mist made the going good to firm.

So, a brief dash at great Speed along a farm track then up the rough, tussocky Staerough hill. It looks straightforward enough, but nevertheless there were at least 25 differing opinions as to the best route to the top, the fluttering Saltire upon which left no doubt as which side of the border we were still on.

Race of two halves this. The preponderance of climbing takes place in the first half, the fast section only arriving when your legs are too thrashed to feel the benefit. I managed to hang on to the coat-tails of Owen and Gordon, who were having a grand old tussle, until a little after halfway. Soon after I faded like a cowboy’s 501s, knowing that Don Reid would shortly be along to gobble me up (Don’s diet consisting entirely of steep descents).

Manny went cheek to cheek with Jamie Thin until the final climb when he edged him out on The Blind Side to scoop the M50 prize. Well done to Lorna Mahoney, who finished second F50, and Ros Evans who was second F60. Forces of Nature, both of them.

M60s are like bus (passes). You wait all day for one, then the top four – G McC, John Tullie (Teviotdale), Ewan Paterson (Highland) and Don Reid – all rattle home with a bawhair between them.

A brilliant race, and £700 in the kitty for Borders Search and Rescue. 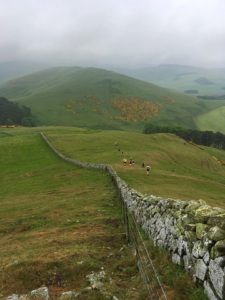