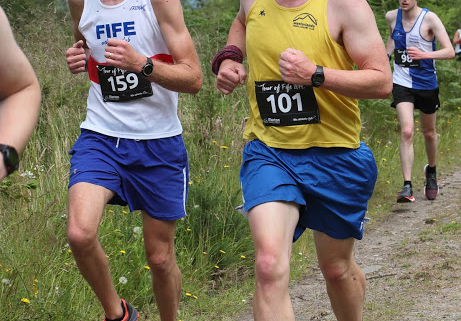 Racing the Tour of Fife is as much a vital component of my summer as Lord’s, Mull and loafing in the garden reading PG Wodehouse. However, attending this year was not without sacrifice: it meant missing my favourite bog n burn (Maddy Moss) and the SHR counter, An Teallach. Ah well, I get car sick anyway. I love Fife and I love the Tour.

The Tour is a five-day event, over five different races, with accumulative times deciding the overall prizes.

Previous finishes have been 19th, 20th, 21st and 20th so the aim was a top 20 finish in a field of 150. A meaningless target, but as a relatively slow M Senior who is never among the prizes, it was a target nonetheless.

The strategy was the same as always. Be within touch on Day 1, then build up a time cushion on Day 2’s hill race, and hold off the leaner, faster, road runners on the later, faster races.

First up is the Beach. The forecast rain had blown through earlier in the day to leave an overcast, still, warm evening in St Andrews. Car trouble had led to a fraught, public transport-dominated journey to St Andrews, as the stress told on my start as I struggled to get into the race, which follows a hockey stick-shaped route, with the hard-packed sand of the main West Sands strip eventually giving way to stodgy quicksand, reducing everyone to a crawl. Likening this to the schlep from cort-ma-law to lecket, I made up time and places here, but not sufficient to prevent me finishing down in 29th and 27.14, a full 44 seconds down on last year. A Top 20 final placing looked a long way off.

This piled on the pressure for the hill race, over East Lomond. The route is essentially Leg 4 of the Devil’s Burdens, but in reverse. This means a stiff, steep climb, followed by a meandering descent down to Maspie Den. This plays in to the hands of the pacy non-hill runners, so I put in an extra graft on the climb to be 12th to the top, and 10th to the bottom of the first brief but steepish descent. There was a lot of flattish running still to go, and I lost two further places while tailing Willie Rennie to the finish. 13th in 30.43, overall classification – 18th.

Next came the mile TT, along Kirkcaldy promenade. The advantage of this event is that there is a limit to how much damage my lack of pace can cause, losing only a matter of seconds compared to the minutes gained the previous evening. My better-than-average hill race meant that I was I was grouped with two tall, lean insanely fast your chaps, who disappeared into the ether before the starter could say Go. my tactic was therefore to pretend that I was leading the group behind, who had started 30 seconds hence. 31st in 5.38. Overall classification, still 18th.

I had a dead-legged feeling on the start line of the Boblingen Way 5k road race, a mercifully-shaded out and back cycle path which lends itself to fast times. The mugginess of the morning gave a clue as to what was to become, as 30 seconds into the race, the heavens opened, and a torrent of rain battered down for the duration. I lack any kind of basic speed, so the tactic was to go out as fast as I could, then hang on for dear life. I claim not to enjoy road racing, but in its way my annual foray into the discipline is strangely thrilling. An eyeballs-out examination of the basics of your core fitness. With a watchful eye on my rivals, I gave it my all and dipped over the line in 30th position in 19.20, dropping down to 20th in the overall classification.

Last up was the 10k trail race, through Falkland estate. The only people within range of overtaking me in 20th were Hendrik van Rensburg (Fife AC), who was 11 seconds behind, and Morgan Windram-Geddes (also Fife), 50 seconds further back. I knew there wasn’t a kick in my legs, so I opted for a quick start to get into the race, and trusted that the others, with four days of racing in their legs, wouldn’t be able to make up the time. Morgan passed me at around the halfway stage and quickly opened up a gap. I was keeping her in my sights, but where was Hendrik? His wife Rhona passed me with 4k to go, and as they seem to pace each other well, he appeared on my shoulder not long after. I couldn’t shake him off and he pulled ahead with a kilometre and a half to go. I had little in the tank when we arrived at the biggest climb in a very undulating route. Those around me began to noticeably slow and I seized my chance with a strong pull up the hill and held on along the grassy bridle path to the finish. Hendrik sprinted past me in the last few paces but I had done enough. 23rd in 20.55. Overall classification 19th.

It’s an entirely arbitrary achievement, but I had raced very hard over five days, holding off some vastly superior runners, and felt very chuffed indeed. 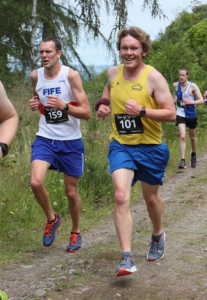 Bog and Burn 2 Races to go