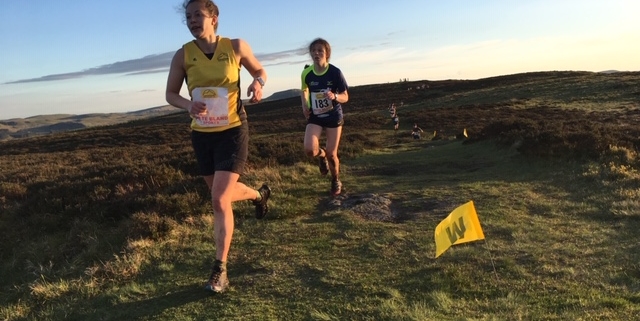 Some categories are already decided.

Julian Warman is in an unbeatable position.

Only Jane Oliver can complete the series. However, she will need to run the last two races to claim the prize.

There is also now only one person who can complete every race, Andrew Fullwood.

The woman’s leader changed at Maddy Moss with Ella Peters (254 pts) overtaking Alex Berry (269 pts). It looks like a straight fight between these two for the haggis trophy. The advantage clearly lies with Ella, but if Alex runs very well in the last two races she could definitely improve her score and take the title.

James Bowden (50 pts) still leads buts he now has a gang on 5 races who could overtake him after Cairn Table. Niall McAlinden (31 pts) and Kenny Richmond (33 pts) are neck and neck with Justin Carter (41 pts) also not far behind. If James can find the form that saw him take 2nd at Cort ma Law he does still have a chance of holding onto the lead. It may all be for nothing though as James Espie has now completed his 4th race and 4th win. Even if he jogs the last two races he will win.

Jonathan Weir (160 pts) still leads but with Kenny Richmond and Justin Carter both on 5 races he is unlikely to stay there after Cairn Table.

Alison Ridyard (252 pts) and Claire McArthur (294 pts) have both completed 4 races. Hopefully they can get to the last two and finish the series.

The prize is going to the westies but the only question is who will take it. Gordon McCaffrey (214 pts) has a wafer thin lead over Don Reid (230 pts). Can he hang on?

Bog and Burn Update (After 9 races)

Tour of Fife
Scroll to top