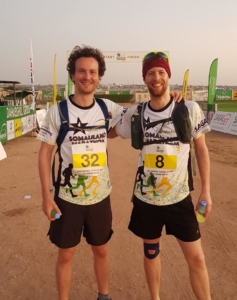 It’s 06;25am, and there are about 35 of us shuffling nervously around at the Start/Finish line in the national stadium of Somaliland. The majority are locals, but there are about 10 international runners, of whom most are based in the Horn of Africa. I’ve chatted to a few other runners, and while everyone was all smiles and enthusiasm a few minutes ago, as the minutes tick away people start to dig out their game faces.

The race starts so early for two reasons: heat and traffic. There is no shade at any point on the course, and it’s predicted to hit 30 degrees before 11am. On top of that, the traffic is a law unto itself. Official road closures are in place, but as time marches on these are more and more likely to be circumvented. The early start makes for a really special atmosphere though, as the race winds through a city starting to wake up and locals greet us or shout encouragement as we run past.

The race director counts us off, and a group of about 10 Somalians and one bemused Norwegian immediately banterstart at full speed. We leave the stadium and start to make our way through the empty streets. The route is a straightforward out and back – the first 7 or so kilometres take us from the city centre out to the suburbs, after which it’s a long slog up a straight road to the halfway point. There are aid stations at 5k and every 4k after that. Alongside food and drink, these also have nurses and buckets of water for cooling off. 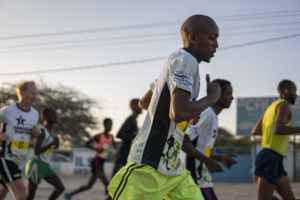 I don’t have a target time in mind – just making it to the start line is enough. I’ve had a few injuries in the leadup to this race, and I’ve been training in conditions that are polar opposites of what we’re facing today. Hargeisa is at an altitude of about 1500m, which adds to the overall challenge of the day. The rough plan is to try to get to the halfway point in under 2 hours, then take the rest of the race as it comes. I’ve taken a leaf out of Chris Froome’s book, and taken a double dose of inhalers before starting. The first few kilometres disappear under our feet pretty quickly, and I find myself leaving the city in a group with a few Somalians.

The Somaliland runners are seriously impressive. A key aim of the race is to increase participation in sport, particularly among women. These guys are running with none of the technology we take for granted – technical clothing, water bottles, nutrition, even trainers. I look down around 10k in and find I’m running alongside a guy who’s doing everything in plimsolls. On top of this, due to the strict laws in the country the female athletes are doing while wearing headscarves and full body covering. 18k in I start to meet people heading back from the halfway point. It turns out the lead group weren’t banterstarting, they’re just speedy beyond all reason. The group has broken up slightly though, and runners are separated by a few minutes.

On the road the locals are almost universally enthusiastic or welcoming. People cheer as you go past, shout “Welcome to Somaliland!”, or in some cases drop what they’re carrying and run alongside you for a stretch. Somaliland is quite off the beaten track for tourists, and while there are westerners who live in the country, they’re still enough of a novelty to be worthy of attention. This is well-meaning, but can sometimes be inaccurate. At one point on my trip a guy driving a bus slows down and shouts at me: “Chinaman! Chinaman – Coronavirus!”

I hit the halfway point at about 1:54, and I’m not feeling too bad. The heat is starting to hit me though, and there’s still a long way to go with nowhere to hide. On the way back the road starts to fill with traffic. It’s clear that the roadblocks are no longer in effect. At about 25k I pass a couple of cars that have crashed into each other head-on, and try to pick my way across the debris which scatters the road. 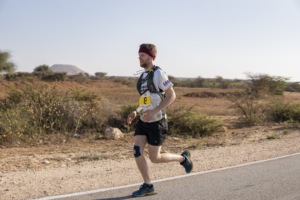 It keeps getting hotter. There’s not much else to do but keep plodding on and counting down the miles. I pass a few runners on the way back into the city, but I’m getting much slower. We pass the hospital built by Edna Adan which was the first maternity hospital in the country, and provides the medical staff for the race. I spend the last couple of kilometres longing for the sight of the stadium and the finish line. When it finally appears I reach for the last few beans and attempt what we’ll charitably call a sprint finish.

I collapse in a near-empty stadium. Hundreds of 10k runners have come and gone in the time I was out on the course. There are only a handful of runners still out there. Special mention to the 2 women runners who kept going and finished under the full heat of the midday sun. They displayed a bit more tenacity than the runner caught getting a taxi between checkpoints.

This is a truly special race. Not a place for PBs or a varied route, but an experience like no other. In taking part, you’re also helping to grow the sport and support women’s rights in a part of the world where progress is often hard to come by. 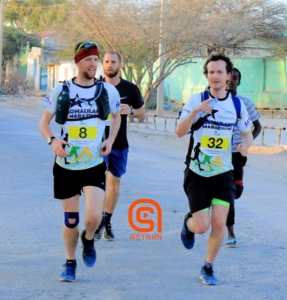 In the Dark handicap
Scroll to top