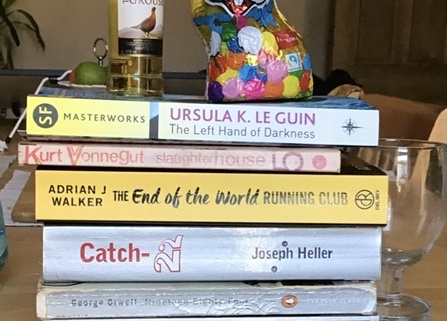 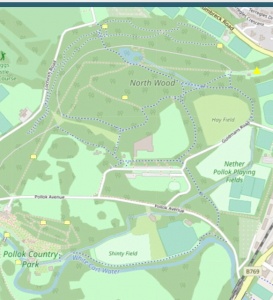 It was a bright warm day in April and the sound of birdsong was striking, I’m sure Tom F would have been able to distinguish at least thirteen different species. As I studied my map and prepared for the physical and mental torture that lay ahead I smiled, like a murderer fleeing the jail I ducked quickly into the woods enjoying the freedom of being out of lockdown. 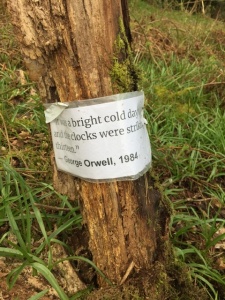 As I scampered around in the nether regions of Pollock House looking for the first checkpoint I began to think I had escaped lockdown into a maze with no escape. What sort of freedom is that? 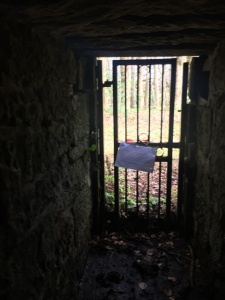 Then I saw the light at the end of the tunnel, unfortunately I had to go down the tunnel. Not knowing how deep and smelly the muddy dark tunnel would get was an intolerable uncertainty that wasn’t making life better at the time. Emerging from the smelly tunnel a Brave New World beckoned me on to the Fairy Tree. 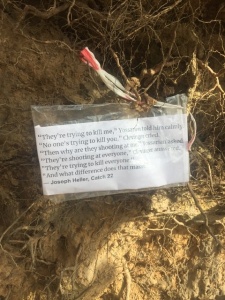 Down to the river the next checkpoint was missing from the tunnel where I expected to find it but the wind had not taken it too far and once found and replaced it was over the bridge and along the river. 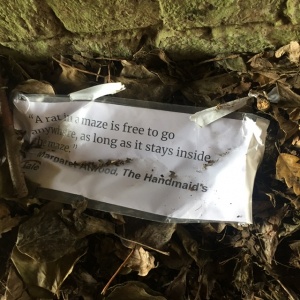 The map here was misleading but local knowledge of a good spot for a swim lead me down the road to the solution. 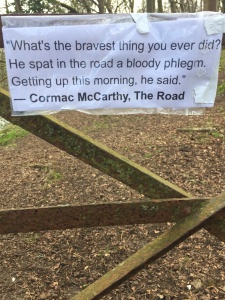 Trying my best to straight line my way to Rat Jaw and the next clue I ended up dropping down into the cow field because the gate to Pollock House was locked. Next it was into the North Wood where the criss-crossing trails could leave you as lost as James Earl Ray in Tenesse. 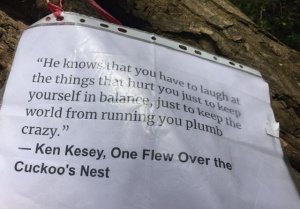 So many lying trees but I located the checkpoint and then headed through the woods for the last two checkpoints and the end of the first lap. Lap 2 was easier with a sense of where I was going spurring me on to complete my fastest lap. 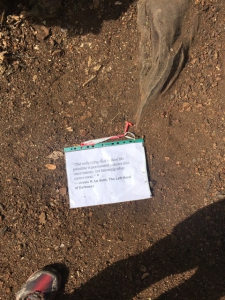 Lap 3, the first counter clockwise lap was a nice prospect even tough I was tiring and thinking that it might have been an idea to bring some water. Reversing the lines and taking the hills in a different direction the checkpoints came and went quickly. 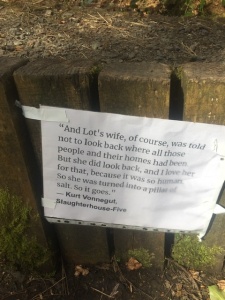 Running along the narrow path by the river back to the start social distancing was difficult, you could see in the eyes of some walkers that they thought all runners were trying to kill then. I dodged into the garlic growing at the side of the path and cut across the edge of the cricket field costing me extra effort and energy. They’re trying to kill me I thought.

As the end of my third lap, the thought of a completed Fun Run raised my spirits and stopped me from going plumb crazy. The concentration required to run on the edges of the trails without turning an ankle or losing your balance whilst maintaining social distancing was beginning to take its toll.

If anyone had asked I would of told them that heading out on the second day for my fourth and fifth lap was nearly the bravest thing I ever did. I coughed into the crook of my arm in a socially responsible way and set off anti clockwise. 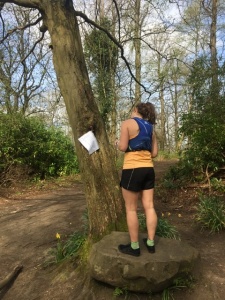 I met a fellow Westie at the top of Rat Jaw and as I coasted away down the hill I resisted the temptation to look back. I hope Ella can forgive me but I couldn’t risk being turned into a pillar of salt, or falling on my arse and rolling through the daffodils. So it goes. 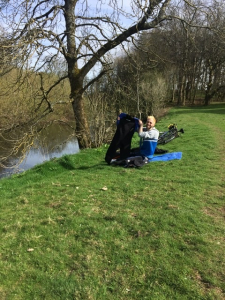 To add to the confusion caused by some competitor thinking they knew more than the organisers the swimming spot checkpoint had been replaced by a swimmer, otherwise the course was intact and as the sun began to break through the cloud another chorus of birds set me off on my final lap. I opted for clockwise, no reason for my choice it just seemed right.

It was brutal, lonely. I suffered. I came to realise that I’ve lost my copy of One Flew Over the Cuckoo’s Nest and I’ve never read Ursula Le Guin, but I can fix that. You gotta love lockdown. We might have to stay local but we can think global. Thanks to Joe and Holly, can I run in the Parkleys 2021 please?