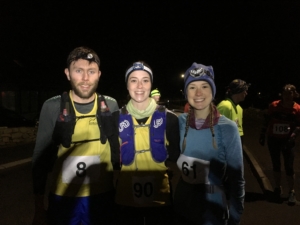 It was the inaugural Knockargety Night Race on the 28th December, and as the start was a 5-minute walk from my parents’ house in my home village, Tarland (Aberdeenshire), it seemed like a good opportunity to justify some festive overindulgence and make room for more cheese and biscuits. The race is a new addition to the night series hosted by Deeside Runners – a 9 km out-and-back through the woods with a wee loop around Knockargety hill at the far end. Ally had driven up north that day, and my sister, Emer, joined us for her off-road racing debut as an honorary Westie for the evening.
We tottered down to register at the local cafe, having scoffed some Christmas cake before a 7:30 kickoff. Having been quite mild in the day, the temp had dropped below freezing and staying warmed up was tricky. After a quick race brief, we were off into the woods in a procession of head torches. Unfortunately, any local advantage I might have had was lost when the route took an unexpected turn. A good reminder that improving map-reading should be number 1 on my resolutions list for the new year. Luckily the course was well-marked, and I spent the first half mostly by myself, trying to catch up with a head torch bobbing through the trees somewhere in front, and stay ahead of the lights creeping up behind. There were various obstacles en route, including fallen trees to jump (or step cautiously) over, a broken gate to climb, and one fence that came out of nowhere on the descent and had to be ducked and clambered through at speed. All good fun, until the descent at the turnaround point triggered a stitch of epic proportions – the ghost of Christmas cake past coming back to haunt me. My progress back through the woods was painfully slow, on what should have been painfully fast ground. After being overtaken by what felt like half the field, the Christmas lights of the village finally came into view and I tried to finish strong along the road.
Ally stormed it, chasing a fast pack of Deesiders, and finished in fifth place. The second outing of the blue shorts was a success! Emer also enjoyed herself, and will be returning. We didn’t stick around for the prize giving, but it was a great race that will hopefully become a regular fixture to the festive season.
1st male: Peter Henry (Deeside) 36.37
1st female: Stephanie Provan (Deeside) 40.57
5th Ally MacInnes: 39.24
39th Kerry Cunningham: 53.00
53rd Emer Cunningham: 58.51
2 January 2019/1 Comment/by Kerry Cunningham
https://westerlandsccc.co.uk/wp-content/uploads/2019/01/IMG_3167.jpg 1536 2048 Kerry Cunningham https://westerlandsccc.co.uk/wp-content/uploads/2018/04/logo.jpg Kerry Cunningham2019-01-02 22:01:382019-01-11 21:39:09Knockargety Night Race
1 reply