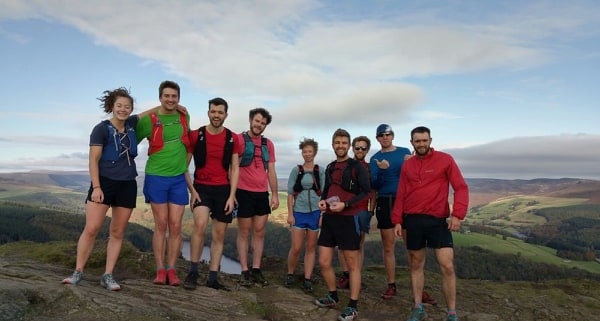 My journey to the FRA’s started abruptly on a Thursday morning after being woken early by my friends Mum in a town somewhere outside of Munich, Germany. Having set my alarm on my running watch which was still set to UK time (an hour behind) I was rather shocked to have literally minutes to pack and head straight to the train station. Here I had an anxious wait for a late running train into town which would leave me minutes to catch my bus.

From here my flight-free journey back to the UK began. As there was no time for breakfast or to pick up snacks for the first leg of my bus journey, I narrowly survived starvation over the next 12 hours by rationing the 2 bananas I had packed. To add to this, toilet conditions on the coach were sub optimal leaving me reflecting on how underrated nature toileting during hill outings can be. A couple of hours of waiting in some random part of Cologne airport and soon I was boarding the next coach that would take me to London and where all the fun begins.

From 9pm onward I was rudely disrupted by my noisy, inconsiderate and overly intrusive neighbour. He spilled over onto the seat next to me and slept sideways on his seat with is face inches from mine. In order to escape his closeness and heavy breathing I tried my hardest to melt into the window beside me to escape his intrusion into my personal space. As if this wasn’t enough he started listening to videos clips of Boris spouting his Brexit crap at 4:30am. On top of this I had managed to forget to fill my water bottle so survived the next 10 hours with a feeble 450ml of water. On the plus side at least I didn’t need to use the toilet. Purchasing a single use plastic bottle was of course still totally out of the question even if my feet did start to experience some considerable oedema, I’m guessing maybe due to dehydration and possible infection due to a roughly popped blister with an old safety pin the night before.

On arrival to London I squeezed my swollen feet into my shoes and began to savour my freedom of being rid of my intrusive passenger. I began my search for the nearest launderette so I could wash my smelly clothes from my Bavarian adventures. However I soon realised I was in some of the poshest areas of London so decided after hours of trailing around I’d try my luck in Essex where I was meeting Tom to share a lift to the Peaks.

Here I was faced with broken machines and fading signs warning of the horrors of using these particular facilities, a stark contrast to the Mayfair launderettes I had just rejected. Now I was resigned to washing my clothes by hand at the bunkhouse but secretly hoped they had a washing machine (which there was!). I waited outside Morrisons in Grays for Tom and observed a group of teenage girls enjoy their cigarettes while chasing after their kids who were intent on running away. Clever kids. Passive smoking harms too. Anyway, 5 hours of Tom’s motorway ranting later, and 36ish of total travelling time for me, we reached the bunkhouse.

Sorry if you’re bored already and I haven’t even reached the race report yet but that is actually a rather short account of a very long journey.

On the morning of the race a small group of us trudged through cow pat filled fields, narrowing missing electrocution (Chris wasn’t so lucky) and jumping over thorn covered ditches (again Chris not so lucky), in search of the busses to take us to the start of the race. Not the best shortcut I’ve taken and a lovely Happy Birthday to me!

As a leg 4 runner I was faced with the anxious wait of running last but enjoyed cheering on everyone as they completed their respective legs, whether is was a hop, limp, crawl or sprint to the finish line (you know who you are). A wee stint of physio/first aid help was a welcome distraction to this long wait. Kudos to those running through injuries and those who completed strong performances both as individuals and as pairs! Relay racing for me seems to be a mixture of nerves, pressure, excitement and anxious waiting! Well done to Dark Peak for providing the wonderful post race chili in compostable and biodegradable packaging, if only they weren’t put straight into general waste bins! At least they tried, and at least it wasn’t plastic.

A wonderful evening of drinks, pot luck dinners, cake and the cardboard box game saw my 25th year of birth out beautifully. Chris made the box game look easy with his surprising flexibility, will Julia and Luci had impressive moves too. It was Ruth that was crowned the winner but quickly had this title revoked after she openly admitted that she used chewing gum to help her pick up the flat piece of cardboard from the ground (deserves a two year ban if you ask me).

Sunday morning saw me quite quickly backtrack on a promise of a 25 mile run to a 25km plod around the wonderful Peak District instead. Thank you Westies for a wonderful weekend and a very memorable birthday!

So despite my less than comfortable journey and my less than optimal race preparations I actually had a surprisingly great race which I thoroughly enjoyed (Jenn informed me this morning I overtook 14 ladies so there’s your proof!). I’d therefore thoroughly recommend flight free travel, not only for the environment but for race performance too!