The morning after the Westies Christmas Party, John ‘JD’ Donnelly, Jenn ‘Lady’s Captain’ Ruddick and I set out to tackle The Cobbler. Having seen the quality of prizes up for grabs the previous night, I put it upon myself to get a race report in. I’m stretching the definition of ’race’ to include a casual jog, but here goes… 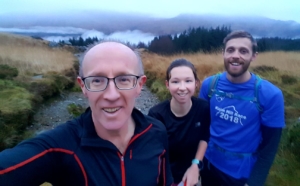 It’s already early afternoon by the time we make it out of Glasgow, up Loch Lomond, and into Arrochar. We leave the car along the eastern shore of Loch Long, avoiding a hefty £9 parking charge, then set off around the head of the Loch. Dodging stinking piles of seaweed, lobbed over the sea wall during the most recent storm, we make our way into the forest and start our ascent.

As we leave the trees and continue up the valley between The Cobbler and its taller neighbour, Beinn Narnain, the cloud starts to close in around us. By this point I’m already starting to feel low on blood sugar, and my hangover has just woken up. The going is steady, but we eventually reach a junction, taking a left to start the final, steepest part of the ascent.

Climbing higher and deeper into the dampness of cloud, we soon hit the first patches of snow (“Snow!” cheers Jenn from front, clearly suffering from neither hangover nor hunger). With each step the air becomes wetter, and the snow deeper and more even. A Raven drops out of the mist – croaking here, somersaulting there – the only sign of animal life. I’m pretty sure We Don’t Belong Here.

My glasses quickly become useless, not helped by the almost-totally-still air. Despectacled, I march on, with Jenn’s scampering silhouette just visible up ahead. Our progress is hailed by JD’s regular altitudinal updates. My body is pretty sure that the numbers he reads out must be in metres, not feet. My legs are too heavy, my breathing too laboured for us to be a mere 2700 feet above the ocean.

Quicker than anticipated, the Cobbler’s distinctive summit looms out of nowhere. We opt against climbing the rocky pinnacle, the thick cloud making it impossible to know how far we’ll fall if we lose our footing. Far enough, I guess.

After a couple of welcome Jelly Babies we start our descent, with each step now taking us away from the barren summit, away from the Raven, and towards some place more forgiving and more habitable. Gingerly at first – not wanting to introduce our tail bones to the cold, wet, mammoth-tooth rocks – we re-trace our steps past the patchy snow line and back onto the path which runs alongside Allt a’ Bhalachain.

This path is the hill-running equivalent of a steeplechase, with burn-crossings and trip-hazards in abundance. But it’s nice and runnable, and we’re finally able to unleash our gravitational potential (which I think is the main point of climbing a mountain, after all). I enter what I like to think of as Legolas mode (“Come, Gimli! We’re gaining on them!”), though my enthusiasm is temporary; my legs quickly tire from the leaping and bounding, and I switch to something closer to Gimli mode (“Very dangerous over short distances…”).

After passing the mighty Narnain Boulders, we eventually leave the damp claustrophobia of the cloud. The relative brightness is short-lived though as we soon re-enter the dark forest, and by the time the trees open out further down the hill, dusk is truly upon us. In the flat light, the aforementioned trip hazards are trippier and more hazardous than ever, but somehow we make it down to the road without event.

We finish with a plod back along the seafront, welcomed by the haunting calls of Curlew from out on the mudflat. We’re back Where We Belong.

Finally, to the chippy, for a very belated lunch.

Trossachs Round Two
Scroll to top