The route was laid, all was ready in plenty of time but where were the runners? At one point it looked as if there might more supporters than runners but as 1pm approached 7 runners were ready to go: John Hamer in his ‘hula hula’ gear, Andrew in his Santa gear, Helen and Don in fetching headgear – Brussel Sprout head and Christmassy bobble hat respectively; Roddy, Dave and Karen going for the more traditional runners dress.  All ably supported by Iain Docwra, Drew Turnbull and Andrew’s son, Sean.

It was a cracking day for a run, beautiful sunshine with grand views down the Blane Valley. The handicaps were well spread out so there wasn’t much activity until the section leading to Boards Farm where Andrew and John disappeared off in the wrong direction enticed by some rogue marker tape. Ooops! Eventually realising their error they came hightailing down the hill to the last gate before the finish, bearing down on Karen. Dave C spotting this, sprinted to the gate to get Karen through and block the way to save Karen’s spot. Chaos ensued, Karen went flat on her face but Dave succeeded in his quest; Hula Hula and Santa were diverted. A fine finishing spectacle!

Numbers were low but we had fun. Roddy awarded the prize of a fine Westies bobble hat knitted by his Mum, to John H for his efforts in laying the course and getting lost! Topped off with a wee visit to the Kirkhouse by a few of us; Andrew and Sean continued their walk along the WHWay to the Distillery for a tour and a few wee beers 😊. 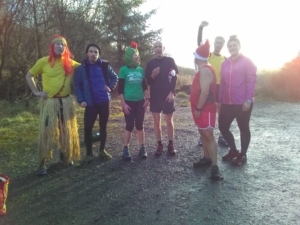 Fourth at the First: Tilli 10k