A group of us spent our leave on the Faroe Islands, a volcanic archipelago lost in the Atlantic, camping near the capital Torshavn. It had been a fine week. Clambering over hills and fjords. Jumping into the sea before retiring to hot tubs. Taking a ferry to a distant island for a promised sauna, where the changing room was in an abattoir.

Race day arrived. Our group was doing all different length races; of Westies Megan Fileman and I were running the marathon together while Holly Eadsforth was taking on the Ultra.

Our bus wound through the fjords to the startline. Holly has already been running for two hours. Faroese drums. The head of mountain rescue tells us Grey men lives in the hills and he hopes we are good people. There is no further safety briefing and I feel mild panic. We are off.

At the top of the first climb we scare sheep and marvel at precipitous cliffs. Then down, down, fast, fast to a Michelin star restaurant for a snack stop; blanched parsnip and salsa verde, gooseberry juice. I prepare to settle in but a stern look from Megan warns me and we are off, off.

The route is sublime. The organisers came here for 6 months and “ran pretty much everything” before settling on this. It is mainly pathless, yet shepherds cairns appear out of the endless bog at intervals. We undulate over high passes and still lakes. Steep descents and ascents. Exposure and a sense of wilderness.

Past halfway and I am somewhat shocked to find we are doing quite well. Neither of us has ever run an organised mountain marathon before and I had genuine fears we would be timed out, or pace it terribly. I start to feel the gnawing ache of being rather competitive and try to concentrate on the burning pain in my legs instead. Better.

We climb to a high plateau and there sits a mountain hut. A bothy maintained by bearded men with beer. Towering jagged rock emerges from the sea and the world seems slightly off balance, as if the view is a hallucination. Possible. We see Holly here and she appears delighted by the ten almond biscuits she has devoured.

Megan and I climb a steep cliff face, balance on the edge of the world for a moment, then hurtle down to the roaring sea below. It is rather beautiful, gulls circle overhead and a burn tumbles with us. We over take a few marathon runners and I thank Scottish training.

The end is series of cliffs, a black-sand beach, another climb, and then a final descent to the beach. There are tears and I can’t talk for a few minutes. I am kept alive by soup and a dog who has an avid interest in licking my water bottle. It appears we ran a few extra miles and more elevation than intended which may explain why the world keeps going black. We sit on the beach, waiting for Holly, watching the sea stacks and drinking port with the woman who feed us waffles. Holly arrives; she has been running for about 13 hours and looks slightly worse than death.

I have never run a race like this and I feel it may be one of the greatest days of life so far. I couldn’t have done it, or enjoyed it, without Megan and her ruthless enthusiasm; thank you.

Ultra Marathon – (Who knows what distance this ended up as? About 68km and 3300m elevation). 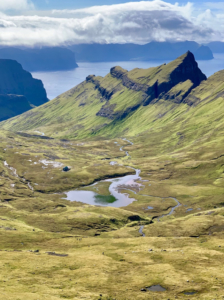 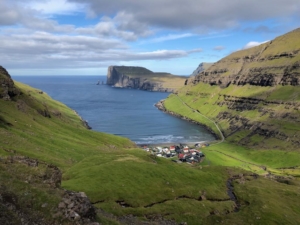