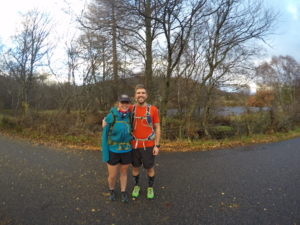 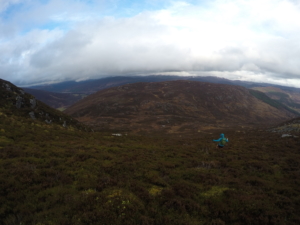 After a long week of commuting, a day (and night!) of graduation celebrations, and the remnants of a head cold, a weekend in the hills was all I craved. Luckily, Tom had had the early forethought to enter us in the Grampian Mountain Challenge, a biennial mountain marathon run by the Grampian Orienteers.

The weekend got off to a great start when, too engrossed in a conversation about the tax implications of Brexit, I managed to get us lost on the way to Braemar. This resulted in a 45 minute detour down some very narrow country lanes in the driving rain. Eventually arriving in Braemar, we managed to get lost again, driving back and forth along the main road multiple times before finally finding the event base, the Castleton Hall. It was here we bunked down next to Gwyn, Outi, and a handful of other competitors for the night.

Unlike other mountain marathons, the GMC has the incredible perk of having your kit transported to the mid camp meaning that our day bags were relatively light. It also allows for a few luxuries, including warm trousers for the evening and a two-man tent that actually fits two people. So it was, that leaving Castleton Hall on Saturday morning, we expected two relatively cushy days racing. Boy, were we wrong.

Both days involved two stages with separate maps, orienteering and full hill maps. Luckily for us, after seeing Gwyn off, Outi gave us a quick run down on what all the orienteering colours/symbols mean (tip for the new players: they are not the same as normal maps!). This meant we managed to fly through the orienteering section with relative ease before hitting the first hill. My shadow of a cold came back with a vengeance at this point meaning Tom took most of the navigation duties while I struggled to keep up. Unfortunately for me, Tom’s navigation technique is to take the most direct route, regardless of contour or features. This meant a lot of bashing through deep heather and some very marginal descents, but also meant we got to see an incredible herd of gorgeous stags near the end of the day that we would have missed otherwise.

The mid camp for the night, a hut at the Linn of Dee, was a hive of activity. Competitors discussed route choices, indulged in the delicious provided meal (stovies and mac & cheese), and shared a few beers in the warmth of the hut (more perks of the GMC). The party raged on until the wee hours (of 7.30 pm), at which point almost all 100 competitors were tucked up in their tents.

Day two started straight into the hills with a climb out of the valley, followed by a very fun, runnable traverse of about 2 mile before dropping down to the Clunie Water. For the first time in 8 years, I beat Tom to the bottom of a hill. Something was wrong. Following another climb, I was moving quicker than him along a plateau. Something was seriously wrong. By the time we made it to the end of the hill section, 3 hours later, Tom’s knee had all but given out, and it was at a crawl that we hobbled through the orienteering section to end the race just in time for prize giving.