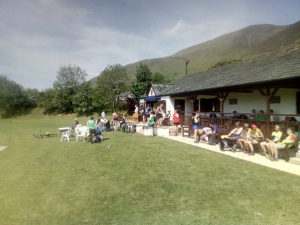 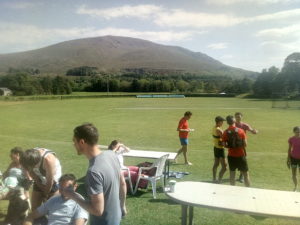 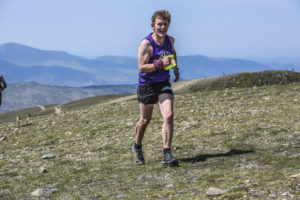 Listening to the dying embers of another dismal yet predictable England batting collapse as I drove south, the sight of cosy Threlkeld cricket club, nestled between the bustling A66 and the towering Clough Head, was enough to lift my spirits for the task ahead: Helvellyn and the Dodds (14.9m and 4400ft).

I was also elevated to see another Westie at race registration, the reassuringly amiable Andrew Fullwood. The best thing about racing in this region are the vests: an eccentric, polychromatic array. I had forgotten my Westies vest, a particular sadness as I was in such exotic climes. Hey-ho, at least I didn’t forget a shoe *cough*. Also head-turning was was the promising-looking tea which was being laid out in the pavilion.

Romantic hopes for a lap of the boundary as a race prologue were dashed as we were ushered towards a small tarmac road to the side of the cricket oval. After a strict kit-check, and a firm but friendly pre-amble by the RD, we were off into what was for me, the unknown, but for most others, very familiar terrain. Whispering in the recesses of my mind were her warnings that there no water to be had on the course. No water station, no river, no burn, no stream and not a cloud in the sky. I hoped I wouldn’t live to regret packing only my puny water bottle.*

So, the race. A short section on tarmac, with a slight incline, and a brief trudge across farmland, before a steep grassy climb of 600 metres or so up Clough Head. Felt ok here. Sprightly, even. I gloried in the gentle descent and amble across very runnable country towards Great Dodd, an innocuous, upturned saucer of a peak. The continuing traverse across parched upland followed a similar vein: gracefully skirting the rounded summits of Watson and Stybarrow Dodd.

As we approached Helvellyn, the more precipitious the terrain became, and the more frequent the masses of day-tripping hillwalkers. Busy, but not Snowdon busy. Not Nevis busy. No cause for concern. Even scored a jelly baby from a pepperpot lady. Win.

At this point I saw the yellow-vested trio of leaders, all Keswick AC, led by course record-holder Carl Bell, beginning their return trip. They were closely-followed in fourth by the first lady, the breathtakingly quick Hannah Horsburgh.

Helvellyn is reached by first negotiating the craggy, narrow ascent of Helvellyn Little Man, which fans out to the left for the gradual ascent to the wide-open expanse of Helvellyn itself, with the dramatic Striding Edge just visible behind. Glorious.

I made slow and steady progress as far as Great Dodd by allowing myself a sip of squash every 500 strides or so. However, by the time the modest return climb to Clough Head bobbed up on the horizon, I had run out and was shriveling fast. I’d been relishing the abrupt descent of CH as an opportunity to make up places, but in the end I made up only three, which were all to be shelled on the tarmac road to the finish.

But finish I did. Wobbly, inebriated, doddery, but home. 3.12 and 50th place. Andrew had a great run and finished in 4.17. We agreed that Helvellyn and the Dodds was hard, hot, heavenly and that the cheese and pickle sandwiches were ace.